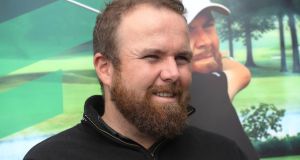 Shane Lowry at a Dublin media event.” I do feel like I am playing with a lot of confidence at the minute, and if I shoot a bad score today I am going to shoot a good score tomorrow.” Photograph: Lorraine O’Sullivan/Sharppix

Shane Lowry’s promotional gig on the rooftop patio of The North Star hotel in Dublin’s north inner city provided an insight into his desire to reach for the stars, in his own way.

One aspect of Lowry’s career path so far is that he has never managed to win multiple tournaments in a season; and, with two of the biggest events of his year coming up – the Dubai Duty Free Irish Open and the 148th British Open – in the weeks ahead, the 32-year-old aims to change that particular statistic.

“I’d like to win again, it’d be nice to have a two-win season for the first time. I’m being greedy now! At the start of the year I said I just wanted one win.”

In truth the season was barely up and running when Lowry claimed the Abu Dhabi Championship in his very first outing of the season, so perhaps that sin of greed isn’t such a bad thing after all. And Lowry’s form of late – a run of 3rd-8th-2nd-28th – would indicate that his game is at a level where that second win can’t actually be far away. Lahinch? Portrush? Why not?

“[The game] is easy to enjoy when you’re playing well. I want to keep going out, enjoying it. If you look at the start of the year, when Bo [Brian Martin] started caddying for me, we were chatting at the start of our relationship, and said we just want to go out, enjoy what we do, do it as best as we can and try to make a few quid.

“That’s what we said to each other. We did alright. We won Abu Dhabi, then you start moving up the world rankings, start to force it a bit and I didn’t play great for the next couple of months.

“We had another chat after Augusta about what way we wanted to go for the rest of the season. And that’s what we said again, the need to get back enjoying being out on the course again. I think that’s what we’ve done the last couple of months. It’s easier to do that when you’re shooting good scores,” said Lowry, who is a golf ambassador for Paddy Power.

As it happens Lowry won’t have his caddie by his side for the Irish Open. Martin’s wife is due to have a baby next week, so Lowry has enlisted the services of his friend – and club professional – Dara Lernihan.

“Bo was half-thinking but I told him not to. I had a kid a couple of years ago and you want to be home and that’s it. I jokingly said it [to Dara] and he bit. Hopefully we’ll do alright.”

Martin will be back on the bag for the British Open at Royal Portrush.

Lowry heads into this stretch of tournaments – fresh, having played only 12 times so far this season – in the sort of mood that doesn’t feature any stress or pressure. Some 10 years (and a couple of months) on from his win in the Irish Open as an amateur at Baltray, the Offaly man heads into the tournament in care-free mode.

“Yeah, I’m almost playing like I don’t care. Do you know what I mean, like? Because I do care a lot. It is almost like, I was disappointed after the first round of the US Open [at Pebble Beach]. But you know what, it is not the end of the world. I went out and played alright on Friday.

“Whereas 12 months ago you have a bad round, I’d be on the range afterwards, beating balls, trying to find something. Because you are always trying to find something when you are not going great. I do feel like I am playing with a lot of confidence at the minute, and if I shoot a bad score today I am going to shoot a good score tomorrow. That makes it a whole lot easier.”

Lowry intends pay a reconnaissance visit to Portrush later this week, something he has already done ahead of Lahinch, so that there is no mad prep work to do on arrival in tournament week. And he hopes, of course, to bring that demeanour which has been a trademark of late on tour.

As he put it, “even the week in Canada, it just felt so at ease out there, up near the top of the leaderboard all week. It felt so comfortable, felt like there was no pressure on me to do anything, whether I finished second or first or 15th.

“It was all irrelevant about how I felt about myself. I suppose freewheeling is a good way to put it...just keep going as long as I can and ride that wave.”