Out of Bounds: Amateur prize worth more than money at Portmarnock 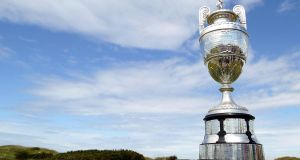 The next week or so provides the greatest contrast there is between those who have and those who want. The US Open at Pebble Beach at Pebble Beach has, in our money, a prize fund of €11 million with €1.9 million to the new champion; while next Monday sees the start of the 124th edition of the British Amateur Championship which, for only the second times in its history, will be staged in the Republic of Ireland.

While there is no monetary incentive to win this oldest of all the amateur championships, the motivation is massive for each and every one of the 288 players in a field regarded as the strongest of the modern era.

The champion will of course lay claim to the magnificent trophy which includes the legendary Bobby Jones and, of course, our own Joe Carr (a three time winner) along with Jose Maria Olazabal and Sergio Garcia of more recent vintage as past champions, while also claiming invitations to the upcoming British Open at Royal Portrush and next year’s US Masters and US Opens.

In effect, next week’s staging of the Amateur Championship is the greatest free show in golf, with no entry fee. The Island Golf Club in Donabate and Portmarnock Golf Club will jointly play host to the 36-holes strokeplay qualifying on Monday and Tuesday, while those who survive this toughest of all qualifying process will then commence the matchplay phase at Portmarnock on Wednesday with the champion crowned come Saturday.

Portmarnock – celebrating its 125th anniversary – will be playing host to the championship for a second time, having previously staged it in 1949, and via some subtle course changes under architect Martin Ebert, with the construction of seven new bunkers bringing the total up to 112, the links will be comparable to any course in any of the Major championships.

Indeed, this is how Paul McGinley described it to me: “It is the best golf course in Ireland. I think it is very fair course, a golf course that gives a great variety to the shot-making skills needed to play because the holes run in so many different directions. It’s very historic, perfectly located, and evidenced by the quality of winners in the Irish Opens there, the cream rises to the top.”

And Pádraig Harrington described it to me as, “the fairest links golf course. Links isn’t generally fair. But there is less luck involved; and, for a links, that’s unusual. Portmarnock give you the best of both worlds, it is strong but fair. You don’t hit the fairway too often and bounce off it, put it like that. The players are lucky to play such a great links golf course!”

And Gary Johnstone, the Links Manager, who clicks the machinery into gear at 6am every morning to ensure the course is presented pristinely, also pointed out the eco-friendly nature of his side of the business.

“We have got beehives out there and put up bird boxes to encourage bird life. Kestrels, hawks, brent geese, estuary finches, sand martins . . . the perception is golf courses damage the ecologica but it is the exact opposite. Chemical use is very limited, especially on this type of environment. What we’re trying to do is to encourage the native grass species and they don’t like chemicals. If you were spraying a lot of chemicals you would kill off that grass species.”

For spectators – with free entry and free car parking – the incentive to get to see some of the world’s top young players, the future stars, among them 20-year-old Dubliner Conor Purcell, the reigning Australian Amateur champion who learned his golf on the famed north Dublin seaside course.

And if you happen to go into the Portmarnock clubhouse, you may spot a framed letter from a former US president on the occasions of the 1991 Walker Cup. “May this year’s competition be the best ever - and remember, ‘head down,’ ‘slow down the swing,’ ‘follow through on those putts,’ and your lives will hear the ‘birdies’ sing and watch the ‘eagles’ fly,” wrote George W Bush.

Similar thoughts could well occupy the minds of those 288 players who will chase the title in the coming week.