Out of Bounds: American has done nothing for his image this year with numerous gaffes 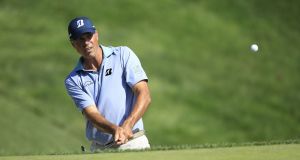 Matt Kuchar hits his third shot on the 18th hole during the second round of The Memorial Tournament. Photo: Andy Lyons/Getty Images

The Player’s Edition of the Rules of Golf is a handy little booklet, which you can pick up – for free – in any golf club in the country.

On Page 100, Rule 16.3 informs us about the circumstances which entitle a player to relief from an embedded ball. It couldn’t be clearer. Apart from the clarity of the words detailing the rule, there are also colour images outlining when and where a player can claim such free relief. It’s not rocket science, that’s for sure.

So, let’s say you’re playing in your club competition this weekend and one of the players in your group makes a case for relief. Let’s say he claims his ball, having hit the fairway and bounced onwards, has come to settle in its own pitchmark on the second bounce.

It would be hard to credit, wouldn’t it?

In such circumstances, though, what do you do? Do you simply agree? Or do you become the arbitrator? Do you make the case that he plays the ball as it lies? Having the little book in your bag will certainly help in ensuring that the player simply gets on with it. He doesn’t have any case whatsoever.

Matt Kuchar lost his battle with PGA Tour rules officials after contesting a bizarre ruling during the opening round of the Memorial Tournament. ⛳

Which brings us to Matt Kuchar.

And, going back to Kuchar’s antics in The Memorial tournament, let’s just say that he didn’t do golf any favours. And he certainly didn’t do himself any favours in arguing (for 10 minutes, more time that it would take to search for three lost balls) that he was entitled to relief after his ball rolled into an old pitch mark left by someone else’s ball.

You’ve got to wonder what the player’s sponsors think of the image he currently portrays to a wider audience. The Bridgestones, Skechers, Workdays and RBCs of the corporate world who are paying good money to be associated with Mr Kuchar must, at this stage, be scratching their heads wondering if it is worth it.

Kuchar – remember – has previous: his behaviour in initially refusing to pay a bonus percentage to a local Mexican caddie after his win in the Mayakoba Classic earlier in the season smacked of an overpaid sportsman with a sense of entitlement and without any awareness of real life. And then there was the concession that wasn’t a concession in his matchplay match with Sergio Garcia.

His latest show of insolence, thankfully, went unrewarded in that the referees - two of them, his request for a third opinion overruled - stuck by their guns and by the rules and didn’t allow Kuchar any relief.

Kuchar’s admittance after the round that he wasn’t entirely sure of the embedded ball rule only compounded what actually took place out on the course. Ignorance is never a defence.

So, what message was Kuchar giving to the everyday golfer? That it’s okay to bend the rules? Hopefully not. Because the rules are the rules, which is why that Player’s Edition of the Rules of Golf should be packed inside your bag should any query (or dispute!) surface in a round. Unlike Mr Kuchar, most of us can’t call for one or two or three rules officials to legislate.