Wexford get another one over on Kilkenny to take Walsh Cup 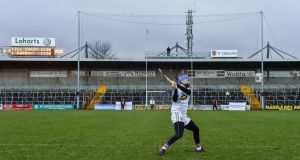 Davy Fitzgerald’s Model County men scored their third straight win over the Cats – they beat them in the League and Championship in 2017 – when coming from behind to land the Walsh Cup in a tense and tight encounter at Nowlan Park on Saturday afternoon.

It was championship fare in all but name as both sides duked it out for the spoils in front of more than 3,500 supporters on a cold and wet January afternoon. Kilkenny, who played all bar three minutes of the second half with 14 men after Richie Reid was red carded, had their noses in front for a long spells, but just when it looked like they would hold on Wexford reeled them in.

However, Wexford weren’t out of the game. They got a big score when Kevin Foley scrambled a loose sliotar into the net in the 67th minute before two injury time points from Paul Morris had them level at the end (1-21 to 1-21).

Kilkenny had started like a side who meant business, and roared into a 0-5 to 0-0 lead within eight minutes. Wexford took time to settle – a fine save by Wexford goalkeeper Mark Fanning from Alan Murphy kept them in the game – but a Murphy-inspired Kilkenny were eight points clear of their rivals after 23 minutes (1-10 to 0-5).

Wexford halved the gap with a run of scores that included a free converted from half-way by Fanning, but Murphy (free) and Conor Fogarty picked off points to leave Kilkenny well ahead at the break (Kilkenny 1-13, Wexford 0-11).

The energy-sapping conditions meant scores proved hard to come by in extra-time. A pair of Paul Morris frees edged Wexford 1-23 to 1-22 ahead by half-time, but Alan Murphy drew the Cats level in the 82nd minute. Wexford thought they had won it when Conor McDonald struck a late point, but another Murphy free sent the game to its novel finish.

Kilkenny made the best of the early frees, going 2-0 up thanks to Eoin Murphy and Conor Martin, but misses allowed Conor McDonald and Jack Guiney to level matters before Mark Fanning pushed them ahead. When John Walsh failed to score Kilkenny’s last free, the cup was Wexford’s.

“It was tough to win the game that way, but it was the right way to decide the game,” said a happy Wexford manager Davy Fitzgerald. “Neither side could go on for another five or 10 minutes of extra-time. That would have led to more injuries.”

Fitzgerald was happy with how the Model County fought their way back into the game, but admitted they can’t afford to start so slowly in their National League opener with Waterford next weekend.

“If we start that way against Waterford we’ll be hammered,” he said. “We were bad in the opening 20 minutes, but when we started to settle in we pulled the lead back. However, we can’t afford to start like that again.”