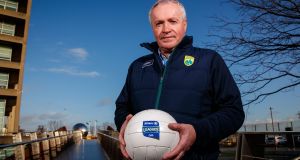 Mikey Sheehy at Croke Park for the launch of the 2018 Allianz Football League. “Dublin are the best that are there at present and there’s nobody to touch them at the moment.” Photograph: Bryan Keane/Inpho

It may not have cost them the game, although Kerry selector Mikey Sheehy has issued a damning assessment of the level of support that showed up in Croke Park for their All-Ireland semi-final replay against Mayo. The sound, he says, was mostly silent.

And for Sheehy, the eight-time All-Ireland winner, the disappointment afterwards ranks alongside Kerry’s 1982 final defeat to Offaly – which famously cost them the historic five-in-a-row.

Part of Sheehy’s issue with the level of Kerry support was how it contrasted with Mayo; the teams drew 2-14 apiece the first day, but the replay the following Saturday Croke Park was clearly more decorated with Mayo supporters, who saw their team progress 2-16 to 0-17.

“The amount of support that they had both days against us!” says Sheehy.

“Actually I felt the Kerry support was embarrassing, there were so few Kerry people there. I would have been very strong about that, particularly for the replay... they didn’t travel, whether it was because it was a Saturday afternoon or not.

“With Mayo, look how many times they have lost, and you go outside and you see the crowd. That wasn’t an excuse why we lost. We lost because we were beaten by a better team. The support though was shocking, shocking.”

Sheehy makes no secret of the fact that poor level of support filtered down to the sideline, and the players: “It does, of course, and the players would be aware of it. To be fair, you’d have to admire them [the Mayo supporters]. They have nearly as far to travel as the Kerry supporters. Our lads, the genuine people go there. But I was definitely aware of that and we all would have been, players and management.”

The disappointment of that defeat clearly lingers too: “One of the biggest disappointments I would have had outside of ’82 would have been our performance against Mayo. It was shocking, so flat, so disappointing like.

“They were far better than us on the day and deserved to beat us by five or six points more than they did in the finish. They were hungry . . . . We prepared very well for it. Played reasonably in the drawn game, could have stolen it and got over them, but we wouldn’t have deserved it. There was a lot of soul searching went on over the winter.”

Still Sheehy had no hesitation staying on for a sixth season with manager Eamon Fitzmaurice; the challenge of knocking Dublin off their perch remains. Only comparisons with so-called ‘great’ Kerry teams are futile.

“I’d have a bee in my bonnet about comparing teams because you can’t really. It was 40 years ago, a totally different game. If you are living in this era that’s the only thing you could compare, and Dublin are the best that are there at present and there’s nobody to touch them at the moment – but we’d be hoping ourselves, Mayo, Tyrone and maybe Galway could come out of the pack.”

3 Anfield stalemate shows dire need to get the freshness back

Liverpool’s attack struggling without Van Dijk; Yan Bingtao wins Masters title 06:51
‘I realised the book had helped people and that has been part of the healing’ 06:15
Ken Early: Liverpool have crumbled without Virgil van Dijk 06:00
To let the Games begin, or not: Three Irish athletes give their thoughts on the Tokyo Olympics 06:00
Eamonn Ryan’s legacy teaches us that things do change and get better 05:00