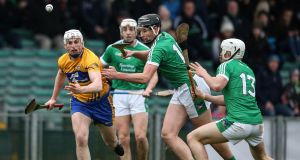 Limerick won the early season bragging rights against their neighbours, Clare, in an uneventful final at the Gaelic Grounds as the home side won it’s first silverware under manager John Kiely.

Both sides will be happy enough with their defending. Limerick because they won and they did not concede a goal to a Clare side who put four goals past Cork the previous week.

Clare will be pleased that for the third game in the competition they did not concede a goal but they will not be pleased that they failed to score for 30 minutes of the second half .

It was close throughout the first half during which they were level four times but by halftime Limerick led by 0-10 to 0-8 with Gearoid Hegarty, making his first appearance of the year, getting on the scoresheet with the last action of the half.

Eight points Aaron Gillane, who finished with eights points, five from frees, and Paul Browne had early points for Limerick.

It took Clare eight minutes to get their first score, a point by their top scorer Cathal Malone.

In fairness to the Banner county they picked off early scores in the second half from Malone, Niall Deasy and Tony Kelly inside the opening six minutes but they were unable to push on and when Limerick had four in a row it virtually sealed the win.

Clare made seven changes from the previous week and later on they brought in some of their heavyweights but 10 minutes from the end they suffered a setback when corner back Jack Browne was sent off for a second yellow card.