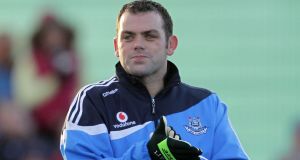 Dublin women’s senior football team manager Mick Bohan is hoping that 2011 All-Ireland winner Paul Casey will be part of his coaching team for the forthcoming season.

Subject to ratification at a Dublin LGFA meeting next month, Casey could come on board as defence coach with the reigning TG4 All-Ireland senior champions.

Already involved with an underage intercounty development squad, the Lucan Sarsfields clubman has indicated that he would be willing to commit to the Dublin women’s set-up on a part-time basis for the Lidl National League Division One campaign.

If his appointment is rubber-stamped, Casey would work closely with Sorcha Farrelly and Paul Gilheaney, and he’s no stranger to former Clare senior football coach Bohan.

The two are friendly, and have worked together with both DCU and Lucan in the past.

“Paul would have been one of our heroes on that quest for Sam in 2011,” Bohan told the media at the announcement of Gourmet Food Parlour as the new sponsor of the Higher Education Committee third-level championships.

“When you see guys at that level wanting to get involved in the women’s game, I think it’s really good for the game. I think anyone coming in from the men’s game to women’s football brings that extra little bit of savvy and nuance and whatever else.”

In terms of the panel of players, there’s been some movement. With 14 new panellists in an extended 43-woman squad, Bohan aims to hold that for the league and cut it after.

It’s understood that Siobhán McGrath – a key defender when Dublin landed their first senior All-Ireland in 2010 – has returned to the set-up after some time in Australia.

Former minor star Muireann Ní Scanaill and Na Fianna’s Lucy Collins are among others to return to the group after some time away.

On the contrary, Dublin look set to be without the services of two-time All-Ireland and All-Star winner Rachel Ruddy for 2018, as she heads travelling. Sub-goalkeeper Emer Ní Éafa and fellow panellist Aoife Curran have also stepped away.

While acknowledging the losses – Ruddy in particular who started in last year’s All-Ireland final win over Mayo – Bohan said his charges are relishing the challenge.

“It’s great and it’s fresh. But look, it goes back into the pot. “Everyone gets those opportunities again.

“We’ll use the National League like we did last year. We’ll chase it but with a view to seeing as many of them [players] as we can.

“September’s gone. We’ve enjoyed our time but it’s a new season. There’s a queue of people waiting for us I’d say.”

Dublin kick off their 2018 season with a tough test away against last year’s beaten Division One finalists Donegal on January 28th.