David Moran: Kerry must be patient with starlet David Clifford 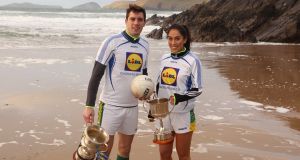 Expectation in Kerry football can be a dangerous thing, especially if your name is David Clifford. Depending on who you believe, Kerry’s best minor in 30 years, or else of all time – and just turned 19 is about to be fast-tracked into the senior team for the Allianz Football League.

And if anyone can halt Dublin’s run to a fourth successive All-Ireland, restore Kerry’s sway in their old rivalry, it must be Clifford, who scored that ridiculous 10-68 in his 12 minor championship matches over the past two seasons.

“Yeah, but some of it is over the top,” says David Moran, his soon to be senior team-mate, in a purely protective way. If anyone knows about dangerous expectations in Kerry football it’s Moran, not just when it comes to fulfilling potential.

“I haven’t seen too much of him training, because I’ve been in the gym, but he’s in there anyway, he’s got the head down, and is working hard. He is very talented, but I think people need to be patient.

“People thinking he’s going to come in, burn it up, just a year out of minor, is probably a bit unrealistic. If you look at the last 20, 30 years, you had Gooch, perhaps, maybe Ronan Clarke [in Down], but it’s very, very rare.

“You get to senior level, age doesn’t really matter. He’s 19, and some of the best guys I played with, say Tommy Walsh, at 20 and 21 was phenomenal, but at 19 he didn’t get a game. Declan O’Sullivan didn’t make the panel in his first year, and after that was phenomenal.

“And the other thing is the full forward line for Kerry last year was the one line that could put their hand up and say ‘we did okay’. It wasn’t as if we have to have someone in the full forward line now. Paul Geaney obviously had a very good year, Kieran Donaghy in the first Mayo game kept us in it nearly on his own, Barry John Keane, Jack Savage, James O’Donoghue got Munster player of the year. It’s probably out around my position, midfield, I wouldn’t have been putting my hand up saying I delivered big time in a lot of the games.

“And I suppose the thing about him last year was that he was very big for his age, he was a very big minor, as well as having all the attributes. This year he won’t have that advantage. But look, it’s very exciting, I’m delighted he’s from Kerry.”

Moran is not necessarily trying to dampen those expectations, just keep a lid on them. He grew up the son of eight-time All-Ireland winner, Denis ‘Ogie’ Moran, which brought a different expectation, some of those he grew up playing alongside not quite managing to make the same impact on the senior team: Tommy Walsh for example, son of Seán, and also Aidan O’Shea, son of Jack, and Eoin Liston, son of ‘Bomber’, each of whose dads won seven All-Irelands.

Moran’s career was also stalled when he tore his cruciate on the same left knee not once but twice and in quick succession (then tearing off half the retina inside his right eye). He came back to win his second All-Ireland in 2014, but as he turns 30 this year, he knows that Clifford will be doing well if too doesn’t endure some setback along the way to senior stardom. There are no guarantees.

“I think he’ll get as much time as he needs, and I think he will need more time than people are expecting. I think Joe Canning probably coming out of [underage] in hurling was the only one that I’ve seen had any instant impact.

“There was a bit of this too with Mark O’Connor before he went [to Australia]), he got man of the match in three out of four Hogan Cup finals and minor finals. People will realise he [Clifford] is only 19, give him a chance, he is marking fellas eight or 10 years older than him, and just learning the ropes.

“And sometimes, minor and senior is a different sport. There’s stuff you can do at minor level you can’t do at senior level. And we do have a very good crop of senior players. It’s not as easy to just push fellas out of the way as might be expected. At the end of the day, we just want to win All-Irelands. The best guy in a position, irrespective of what age he is, will be on. That’s the way it needs to be.”

No guarantees either that Australia won’t come calling again. Moran, who will sit out the early rounds of the league to recovery from minor injury, also went on trial to the AFL, but wasn’t offered a contract. Clifford has for now turned down a possible move Down Under, only things can change there too.

“Sure it would have to be a temptation. I mean, if Munster rugby came calling, it’d be the exact same thing. People say football is getting much more professional. But it’s actually getting so much more amateur, because you’re training harder than ever, and still working. I have mixed emotions, but no regrets, which is a big thing. I went over and gave it everything I had, came up short. I came home, got on with my career. But I don’t wake up in the middle of the night wishing I did or didn’t go.”

Just one of the dangers, perhaps, of being David Clifford right now.

Moran was speaking at the launch of the Lidl Comórtas Peile Páidí Ó Sé club tournament, set for February 16th-18th February on the Dingle Peninsula. Details on www.paidiose.com.

Andrew Coscoran runs best of the Irish in 1,500m final

Klopp says failure to make the Champions League will not see players leaving 22:35
Andrew Coscoran runs best of the Irish in 1,500m final 22:28
Munster overcome gutsy Connacht to reach Pro14 final 21:56
Glory game sweet solace for Gündogan as he copes with lockdown loneliness 21:30
Harry Maguire unlikely to be summoned to court for appeal in Greece this year 21:20