Return of An Ghaeltacht: New force awakens in West Kerry 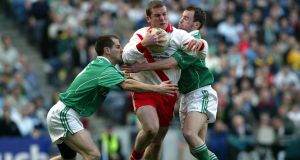 Dara Ó Cinnéide of An Ghaeltacht in action against Caltra in the 2004 All-Ireland senior club final. Ó Cinnéide is now a selector for the Kerry side . Photograph: Andrew Paton/Inpho

These can be dark times for the rural GAA club. Especially in West Kerry when it’s wintertime too. Generations can quickly be eroded and likewise treasured parts of the land fall into the sea.

It’s now 14 years since An Ghaeltacht reached the highest stage in the club football championship, albeit when losing the 2004 All-Ireland final in Croke Park. Such was the erosion of players in the aftermath they soon dropped to intermediate level, in danger of becoming another lost relic in the increasingly suburban game.

Only now a new force awakens, and nothing whatsoever to do with West Kerry being rediscovered as a famous film set. On Sunday, An Ghaeltacht face off against Tyrone’s Moy Tír na nÓg for a place in the All-Ireland intermediate final – and a return trip to Croke Park next month.

For former An Ghaeltacht forward and current selector Dara Ó Cinnéide, it’s not so much a reawakening as a natural recycling, the club carefully putting all its resources to maximum use. Ó Cinnéide was one of several Kerry county players on that 2004 team, along with the Ó Sé brothers Darragh, Tomás and Marc, plus Aodán Mac Gearailt.

That careful recycling is reflected in the fact Marc Ó Sé is still being used, as current player and co-manager (along with Conal Ó Cruadhlaoich), while the new generation comes through, including the Ó Sé’s cousin Pádraig Óg, son of the late Páidí – who delivered a man-of-the-match performance at centre-back when they won the Kerry intermediate title last October.

“It’s your classic rural club story,” says Ó Cinnéide. “I mean we came from nowhere, to get to where we were in 2004. We won the Junior B in Kerry, back in 1992, and it started from there. A lot that group were only 17 or 18 at the time, the likes of Darragh and I, and by the time 2004 came around we were actually seasoned veterans.

“And we’d gone 20 years winning nothing before 1992. So it’s a cycle, and you see that in small rural clubs the world over. Every club with a small population will occasionally get their golden generation, a group that stick together, and that was us. Then came the classic transition, where players retire, the team fractures, and suddenly you wake up one morning and you don’t have a team anymore.

“Even in 2004, when we lost that day, I kind of knew this was it, because we were coming to an end. I’ve said before we were actually a better team in 2001, when we won our first Kerry senior title. We just didn’t the Munster championship that seriously, there were so much celebration, too much euphoria. It was bonkers.

“Then we played Nemo, who along with Crossmalgen were the greatest club team of all time, and didn’t really take it serious, win or lose. In hindsight, that was a better team that 2003, 2004, and we should have beaten them. They just scrapped over the line. By the time 2004 came around we were actually a team in decline.”

An Ghaeltacht lost that 2004 final by a single point to Galway champions Caltra, inspired by Michael Meehan. There was some consolation for Ó Cinnéide later that year when he captained Kerry to the All-Ireland final win over Mayo, but still few people expected the club to drop away so fast.

The reasons behind the revival are very simple, good club management, underage work, and Pobalscoil Chorca Dhuibhne, in Dingle.

“We did slip dramatically after that, up until 2014, really. A decade slide actually. Maybe emigration played a little part too, but having said that I’d struggle to list players who were missing, might be in Australia, or America.

“The reasons behind the revival are very simple, good club management, underage work, and Pobalscoil Chorca Dhuibhne, in Dingle, under Eamonn Fitzmaurice and Tommy Griffin (who won back-to-back Hogan Cups in 2014-2015).

“Marc Ó Sé is still there too, 38 this year, getting better with age. There is a huge groundswell of support for this group at the moment, which is great. I’ve seen what it’s doing for the community here. And the Kerry clubs who have won intermediate and junior titles in recent years. We don’t have that, and know what it means not to have it.”

The same thoughts, naturally, as Moy, who still boast a certain Seán Cavanagh in their ranks, along with brother Colm. They’ll be back in the senior ranks for the first time in 35 years, and true to the old Kerry-Tyrone rivalry, the only thought worse than losing on Sunday is the thought of losing to the other.

“I can’t imagine Marc Ó Sé ever imagined he’d be facing Sean Cavanagh again,” says Ó Cinnéide. They’re similar kind of stories, both teams with the chance to get to Croke Park. We’d just like to get another two weeks out of it, get back to Croke Park, and I’m sure they’re saying the same in Moy.

“Because I can say by a good one hundred miles the biggest disappointment of my player career was losing that 2004 final. The year still ended on a high, but talk to Darragh, Tomás and Marc, all those guys will say the same . . .”