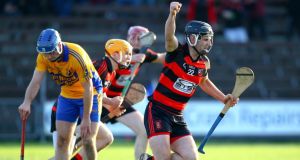 SUNDAY
(All games 2pm unless stated)

Ballygunner (Waterford) v Na Piarsaigh (Limerick), Semple Stadium, Live, TG4, 1.30
If Ballygunner pull this off, it will be one of the great Munster club campaigns. They got past Thurles with a couple of rat-a-tat points in the last three minutes of extra-time. Despite being five down at half-time against Sixmilebridge, they got out the gap by a point, surviving the concession of an injury-time goal. This will be their ninth game in 10 weeks - for them to be doing their best work at the finish of these games says only good things about their mental fortitude at this point.

They have the Waterford championship sliced and diced at this stage, having just completed the first four-in-a-row there by anyone since the 1960s. But to complete the circle, they will have to do something that nobody has yet managed – beat Na Piarsaigh in Munster. The Limerick club’s provincial record since winning their first county title in 2011 reads Played 10, Won 9, Drawn 1. Two of those wins were over Ballygunner so there is no shortage of motivation here on either side.

Ballygunner are available to be backed at around 2/1. They are battle-hardened and have seen everything under the sun at this stage. With Shane Dowling sidelined for Na Piarsaigh, this could be Ballygunner’s time.

Cuala (Dublin) v St Martin’s (Wexford), Parnell Park, 2.0pm
St Martin’s weren’t the sexy pick for the Wexford final and they’re an even harder sell here. They will enjoy that status. They gave Oulart a right hammering four weeks ago and though they’ve lost the Wexford football final in the meantime, they’ve had plenty of time to work up a plan for Cuala.

First job on the to-do list will be keeping tabs on Con O’Callaghan. Dicksboro had to dragoon Cillian Buckley into a man-marking job after just 10 minutes in the quarter-final and even their All Star defender couldn’t hold him. St Martin’s may need to go for a sweeper but if Mark Schutte is fit to play for Cuala, the Wexford champions’ defence could struggle for bodies. Daithi Waters and Rory O’Connor are threats for Cuala to keep an eye on but overall, it’s hard to see anything only the Dublin champions advancing.

Verdict: Cuala Kilcormac-Killoughey (Offaly) v Mount Leinster Rangers (Carlow), Tullamore, 2.0pm
Successive Leinster title winners from half a decade ago, neither of these sides kicked on particularly after their once-in-a-lifetime success. So both are on something of a rescue mission here, the prospect of planting a flag in a Leinster final in their sights.

Kilcormac-Killoughey look like slightly uneasy favourites having almost coughed a massive half-time lead in the Offaly final. They may have something in hand over the Carlow champions here but we said that about the Borris club in most of their games in 2013 and look how that ended up. Mount Leinster’s win over Camross looks to be a stronger formline so we’ll give them the nod this time around.

Derrygonnelly (Fermanagh) v Cavan Gaels (Cavan), Clones, 1.45pm
Derrygonnelly could live to regret not squaring this one away the first day, with Cavan Gaels having frozen in sight of the line in normal time. The Fermanagh side had more chances to win it, Cavan having scored just two points in 44 minutes, including extra-time. Seanie Johnston needs to be more effective though - his deep-lying role took him away from the scoring zone and kept Derrygonnelly in touch. Fix that, and the Cavan side can go through to meet Slaughtneil in the final.

1 Gordon D’Arcy: Change was advisable before Twickenham; now it is inescapable
2 Gerry Thornley: Wild reactions to this Ireland team as fickle as the wind
3 Cheltenham keeping a watching brief on coronavirus
4 Mayo return focus to the pitch after breaking from Tim O’Leary
5 Dan Tuohy explains ‘rotten to the core’ comments
Real news has value SUBSCRIBE

Seán Moran: Dublin and Galway make good starts in differing circumstances 07:00
Donal Keogan keeps a level head as Meath manage the ups and downs 07:00
Gordon D’Arcy: Change was advisable before Twickenham; now it is inescapable 07:00
Mayo return focus to the pitch after breaking from Tim O’Leary 06:00
Dutch duo on ‘a mission’ to get Ireland to Euro championships 06:00
Here is your handy guide to sport on television this week