Austin Gleeson learning to live with all the great expectations 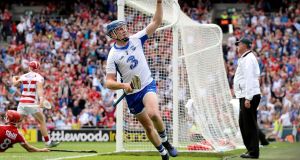 In a quiet cubby corner of a hotel on the quay in Waterford, Austin Gleeson is picking over the bad and good of a year he wished was better. Mostly the bad, it has to be said. This is the downside of committing your life to something so black and white as numbers on a scoreboard. There’s no fun in poring over your own autopsy.

So despite Gleeson playing in his first All-Ireland final and finishing the year with the third All Star nomination of a four-season career, 2017 feels like a wound whose scab he will be picking at for a while yet.

He came into it as the reigning Hurler and Young Hurler of the Year. The latter award was a no-brainer; the former was a mild surprise given that Waterford hadn’t been in the 2016 final and was put down in some places to the two Tipperary candidates splitting the players’ vote. However it was arrived at, it did Gleeson no favours when it came to making his way through 2017.

“I didn’t feel it from other people. I felt it from myself, to be honest. That was the bar I had set myself for 2017 and it just didn’t happen for me. I was more in and out than really effective. I had a few games where I was tightly marked, the All-Ireland final being one of them, and it never happened for me.

“That’s the way I felt the majority of the year went for me and it’s something that I’m going to be working on over the winter, trying to deal with it. I’m not going to put myself under less pressure just because the awards aren’t there but I am hopefully going to go out and just play free hurling.”

With the weight of expectation on him – and the level of agitation aimed his way when he doesn’t quite live up to it – it’s easy to forget how young Gleeson is sometimes. He only turned 22 the week of the first-round qualifier against Offaly. The day Clare won their All-Ireland in 2013, he and his team-mates were skittering around Croke Park having ended a Waterford minor All-Ireland famine that had stretched back to 1948. With any luck at all, we have at least a decade of Gleeson ahead of us.

So he keeps on keeping on. Over the winter, he’s doing some off-season gym work for the first time. He’d have done it last winter but he had a niggle behind his knee just below his hamstring and all he was allowed to do was rest it. But this time around, he’s doing a handful of one-hour sessions a week just to add a little bulk to his tall frame.

The harder work, he reckons, will be carried out above the shoulders. Midway through the summer, he decided to defer his final year of college doing business in Waterford IT. He started working for Bank of Ireland as a youth ambassador so he’s far from idle. But he needed to make time to rinse out his head a little and this felt like the best chance to do it.

He knows what the problem is. Or what it was this summer anyway. Far too often, it took far too little to knock him off his game. He wants to be the kind of player who can put an error behind him straight away but he isn’t. Not yet.

“You’d be beating yourself up if you made a mistake. You drop a catch and straight away you’re thinking, ‘Why didn’t I catch it?’ Or if a ball comes in low, 50/50, and your man gets it, you’re thinking ‘Why didn’t I win that ball?’ Even though the players you’re playing against are the exact same level of ability, the exact same level and everything. It’s just in the back of your head that you’re expecting yourself to be out in front and to do the things you’re supposed to do and that you were able to do before. But it just wasn’t working.

‘In the back of your head’

When you’re 21 and you’re the Hurler of the Year, it’s hard to be upfront about your weaknesses. It’s harder still not to feel like you’re getting found out. The natural human reaction is just to try harder but eventually it becomes like a knot you can’t get out of a shoelace – the harder you pull, the worse it gets.

“It was down to me. I was always picking out the bad stuff I was doing. That’s probably why I was so in and out of games. If I did something good, I was just moving on to the next ball. If I did something bad, I was kicking myself for five minutes. And I couldn’t get into games because of that.

“You have to be really extremely mentally strong to get over that in the middle of a game. But it just wasn’t working for me. No matter what happened to me, if I did something bad in a game, it was in the back of my head for the next five minutes and I couldn’t get over it.

“There’s no one perfect at all. Something is going to go wrong for you in a game, no matter who you are. But if that thing is always sticking in your head, you’re never going to improve.”

Gleeson is one of the Waterford players who has grown up with Derek McGrath, hurling under him with the school in De La Salle since he was 12 years old. And yet close as they are, Gleeson kept it all to himself, figuring he’d work his way around it and trusting that he’d find a way.

In the All-Ireland semi-final against Cork, he did just that, overcoming an ordinary first hour by putting in a scintillating last 10 minutes in which he set up Jamie Barron for a goal with a brilliant crossfield pass before going on to score the goal of the year himself. He spent the final hoping that a similar turnaround would come but it never did.

“To be honest, I didn’t really talk to anyone about it because I thought I’d be able to get out of the rot myself. I’ll have to have a word more so this year. I’ll have to, simply because I know that it happened to me and it affected how I played. I don’t know how I will react if it happens again next year. I don’t know if I’ll let it get to me again. So I’ll have to talk it out and see.

“I heard that Tommy Walsh, if he ever did anything wrong, he would wipe the boss of the hurley and use that as his way of moving on to the next ball. So that’s something that I have realised, that I need to find something that I can use as a trigger if something goes wrong.”

Game passed him by

The final against Galway was a bust for Gleeson, no other way to describe it. It was his 18th championship appearance for Waterford and the first in which he failed to score. All through the summer, he’d been in and out of games but no matter how patchy his form, he’d always been able to conjure up a brilliant moment from somewhere to get himself into the game. Not here, though. Biggest day of his life and the game passed him by.

“Yeah, it did,” he says. “There was one instance where I got the ball and I could have got myself into the game but the whistle went and he gave a free for us. And that just made me even more frustrated. I was just like, ‘Aw, this is just not my day at all here.’ It was just the way kind of everything fell on the day.

“I have watched it back. It was tough. It was, I don’t know – it was more like a blur when it was happening. Everything Galway hit was over the bar. Some of the scores there were absolutely phenomenal.

“The first four minutes were crazy and I remember standing on the pitch and looking at the clock and seeing that it was four-nil after four minutes and just going, ‘Oh no, please don’t be 2008 again.’ And then Kevin got the goal and that settled us a small bit and we kind of got back into it. It was nip and tuck but you couldn’t begrudge Galway it at all.”

Better not, in any case. As luck would have it, the two counties are going on their team holiday to the same spots – New York and Cancun – in the last week of December. When the new year comes, the season will start earlier and faster than ever.

He intends to be ready.

The Offload: Assessing rugby’s risky (temporary) laws 10:00
All in the Game: Nigeria bite back in war of words with Redknapp 09:00
Colin Kaepernick’s exile is too fresh for NFL to speak out on US protests 07:00
1913: The year the GAA really started to get its house in order 06:00
Ken Early: Ken Early: Why international football is fading into obscurity 06:00
Crossword Get access to over 6,000 interactive crosswords