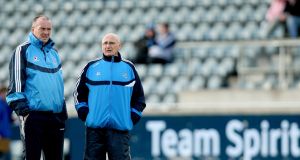 Pat Gilroy and Mickey Whelan pictured in 2011 during their time as manager and coach of the Dublin football team. Photograph: James Crombie/Inpho

Whelan previously worked alongside Gilroy when he guided Dublin to the 2011 All-Ireland football title, Dublin’s first success since 1995. Whelan, now 78, was also Gilroy’s manager in 2008 when St Vincent’s won the All-Ireland club title.

Gilroy’s first game in charge will be this Sunday’s AIG Fenway Classic in Boston, a Super-11s competition where Dublin play All-Ireland champions Galway in the first semi-final (5.30pm Irish time); Tipperary and Clare meet in the second game (6.30pm Irish time) and the final set for 8pm Irish time.

Gilroy has named a 26-man travelling panel which includes Danny Sutcliffe, the former Dublin All Star who opted out in recent years under previous Dublin hurling manager Ger Cunningham.

1 Andrew Porter: Chasing Cheika will keep me on my toes as ‘holidays’ arrive
2 GAA expected to accelerate return to play programme on Friday
3 Bernard Jackman helping world’s top coaches pick each other’s brains
4 Joshua Kimmich: ‘we have to wear masks and take showers at home’
5 How a GAA club sprang up in east Belfast over Sunday breakfast
Real news has value SUBSCRIBE