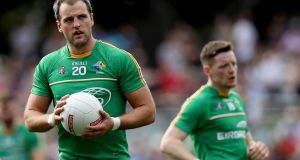 Ireland’s Michael Murphy scored 20 points in the first Test in Adelaide despite being hit with a vomiting bug. Photograph: Tommy Dickson/Inpho

Michael Murphy’s kicking prowess picked him up 20 points in the first Test in Adelaide and the performance naturally attracted the attention of the Australian media. More remarkable was the fact that as one of the players affected by the bug running through the camp, he’d only got off his sick bed in time for the contest.

“I didn’t really know until I got out there how I would feel,” he said on Wednesday as the Ireland players arrived in Perth after a couple of days farther down the coast, “just drained of energy of all sorts. When you get out there and you get the first rattle, the first bang, the tail goes up and you’re mad for action. I got through it all right.”

He must have been shattered if he was also trying to shake off an illness but he says that he never contemplated standing down.

“Well, not really. I was going to go down and try it anyway, try the warm-up at least. Going out in the heat first time around the tongue was fair wagging, but after that it was grand.”

A veteran now of eight Tests going back seven years, including the 2013 series as captain, the big Donegal footballer has been one of the current game’s most distinguished practitioners.

“It’s a game I’ve always enjoyed playing,” he acknowledged. “It really emphasises the couple of key skills that Gaelic football’s in need of – kicking and catching. You can see the Aussies, it might look slightly unorthodox at times but they’re quite good at kicking and catching.

“Any time they show you up on that, they tend to win games. That’s two skills that are emphasised in this game, that’s why I enjoy it so much.”

In terms of the concessions to either country, the impositions on the Australians are more noticeable in that the AFL side have to provide a goalkeeper and play with a round ball but the tackle is quite alien to Irish players and its impact can be very unsettling when players find themselves one-on-one with the ‘keeper.

“A couple of those opportunities, when the ‘keeper comes out and blitzes you as quick as they do, you’d tend to maybe step around them but you have to really get your shot away here because they’re so quick and so big and so nimble in the tackle to get around.

“They don’t leave you with any space at all with any chance you do get in that area around the goal but even out the field too, I got wrapped up in a tackle for double-thinking that split second more. It’s not a nice place to be.”

Murphy bemoaned Ireland’s lack of accuracy when they had the opportunities.

“They’re so quick in terms of their handballs. It’s something you think we’d be decent enough at in our own game back home with the hands, but they bring it to a complete new level in terms of the amount of numbers they put through it.”

Joining the panel is Monaghan’s Darren Hughes, for his fourth Test, who arrived in Perth with others. Even though he is a known enthusiast for the international series he had been unable to travel for the first Test due to his club Scotstown’s county championship success. He says that the late call-up last weekend took him by surprise.

“Yeah I was. I wasn’t long sleeping after the game [first Test] , having got up to watch it. I was surprised to get it but happy to come out. I was at a couple of the training sessions, but it was getting too hectic with the club.

“When we went to the replay with Ballybay [Monaghan SFC semi-final] I just left it. I couldn’t commit. I had the conversation with Joe [Kernan] and said I wasn’t in a position to be in contention with the club training on Friday night and the boys being in Dublin the same nights, the club had to come first at that stage of the year.”