Series may be beyond Ireland but test success remains realistic goal 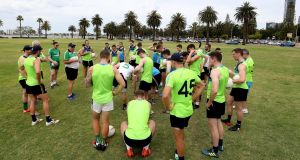 Any way you shake it, the awkward fact remains that no team in the 19-year history of the resumed international rules series has overturned a 10-point deficit in the second test.

It would be a suitably historic achievement for what is the last match being played in the Subiaco venue before the new Perth Stadium opens in Burswood.

The mood in the Ireland camp is better this week, the result of better health and the arrival of a couple of reinforcements – Darren Hughes and Ciarán Sheehan are experienced internationals – but the sense of being a bit behind persists.

In normal circumstances the first test would have helped to bring on a team largely made up of rookies at this level but with all of the disruption they’re really just getting their first optimal crack at it this weekend.

Manager Joe Kernan and his team have spoken about the importance of cutting out errors, which were far too plentiful in Adelaide, but the reality is that Australia will also improve – although the view that this is inevitable isn’t quite true as Ireland have actually registered the greater improvement more times in second tests than their opponents.

Yet, listening to AFL captain Shaun Burgoyne detailing the areas in which he believed his team had become more comfortable it was easy to anticipate a higher level from them as well.

Ireland need to score more and get more players scoring, as the dependence last week on Conor McManus and Michael Murphy, which was always going to be considerable, was too extreme. There was a suggestion that Aidan O’Shea might get forward now that the team is back to more or less full fitness.

“I think so,” said the Ireland captain. “Last week I played a lot of game around the middle with Gary [Brennan] unwell and Michael as well. We’ll have a bit more flexibility in terms of where we can position guys. I probably expect to be spending a bit more time forward but it will all depend on how the game is going.”

Sheehan, if selected after his call-up, could well provide some enhanced attacking threat and his AFL instincts will also be a help. Having been released by Carlton he sounded in the zone for the challenge ahead when asked did he feel the test could put him in a shop window for other clubs.

“To be honest, I haven’t really thought about that. When I got the call, I was just really focused on the group of lads that are here. I watched the game intently last week, and I really enjoyed it ,and when I got the call I felt I could bring something else to the game this weekend and that’s all I’ve been focusing on for now.

“If something happens after we’ll see how it goes but to be honest my sole focus is on getting a performance this weekend and getting us over the line.”