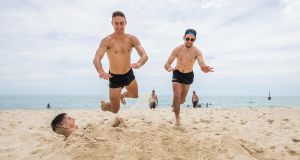 Conflicting emotions after the first test in Adelaide: there were those connected to the Ireland team who said that, with illness threatening havoc, they would, if offered that morning, have taken you hand off for a 10-point defeat. Yet there were moments when Ireland looked sufficiently on top to aim for a more ambitious outcome.

Shane Walsh’s flirtation with goal in the dying seconds could have reduced the deficit to five, and Saturday’s second test in Perth would be even more firmly in the melting pot.

Overall, though, the set-up is about right. There was plenty of merit in the Australian performance. As ever, when they bring a strong team to the internationals they are very hard to beat.

Their subtlety in moving the ball and screening Ireland’s movement was nuts and bolts stuff from their point of view, but the firepower of their forwards was a constant threat.

Nat Fyfe’s ability in the air and his kicking accuracy were as good as anything the series has seen from an Aussie since the days of Nathan Buckley, and caused Ireland constant problems.

But he wasn’t alone: Chad Wingard has impressed any time he has played international football, and his amazing mark in the first quarter, caught one-handed as if in homage to the Adelaide Oval, was a stand-out moment.

It’s hard to underestimate the impact on Ireland of being short-handed. Their affected players created debilitating shortfalls: on the inter-change bench, which would have been pressed fully into action in the sweltering conditions, and in key personnel, especially Gary Brennan, whose ability to take marks had been a feature of the 2015 test but whose less than full fitness made him unable to hit top gear in Adelaide.

The knock-on impact was to concentrate dependency on Aidan O’Shea and Kevin Feely, and they were at times overrun even if manager Joe Kernan was quick to point out that Ireland had competed better than initially expected on the marks, actually winning more than their opponents

One unambiguous positive was the availability of a second test to put into practice the lessons learned the first day. Had it been any of the past two staging of the series, Ireland would be a week home by now and unpacking their regrets.

There are a few areas in which the visitors know they can improve. There was a tentative quality to their defence, a tendency to stand off when the international game is about constant pressure – it’s not like at home where the best you can do is shadow a man in possession; aggression pays.

Kernan noted that any time his team put a press on the Australians they were likely to cough up possession.

It’s all easier said than done, though.

Mistakes and fumbles happen because players are under pressure, as they inevitably are in a game most haven’t played previously. It’s a version of the famous Mike Tyson quote: everyone knows how to do what they’re supposed to be doing until a bulky Australian, weaponised with the International Rules tackle, invades their space.

Although it has been an awful couple of weeks for Niall Murphy and Enda Smith, whose first call-ups have been destroyed by the stomach bug that swept through the camp, everything has settled down a bit by now, and the two call-ups, Darren Hughes and Ciarán Sheehan, both have excellent track records at international level.

Hughes could be especially important as, along with a full recovered Gary Brennan, he adds to the presence in depth that Kernan wanted for the middle of the field. This would release Aidan O’Shea for occasional tours of duty in the full forwards.

As it stands the tactic of keeping that inside line of attack as high up as possible will undoubtedly create chances, and the hope is that Conor McManus can augment his extraordinary “overs” kicking ability with a bit more sharpness in front of goal.

Ireland had the chances to get goals last week, and will probably get them again. Sharper finishing could go a long way to threatening the apparently preordained course of this series.

Australian coach Chris Scott was interesting in the way he thought out loud about shutting up shop to defend the 10-point lead. The problem for the home team would be that although they looked the better side, and have every chance of kicking on in Perth, they would not want to over-think it either.

There was something exhilarating about the high-wire act that left a novice goalkeeper to play a couple of roles in defence – net minder and sweeper – while the defence pushed up. If they try to sit back inviting Ireland on might prove a mistake.

This will be the last match at Domain Stadium, and that will add an emotional charge to the Australians. If Ireland really step it up a test victory is possible but a series win unlikely.