Time to shake off winter blues and greet another GAA season 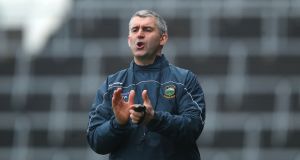 And so it begins again, the long, slow summer that always starts in the grey and cold of winter.

After an off-season of seemingly interminable yak, it’s time to get the coats and hats and colours out and head off to the games once more as the football and hurling leagues demand our attention afresh. Not a moment too soon, either.

If the incessant carping that soundtracks every GAA winter is probably just proof of the depth of the country’s devotion, it still comes as a splash of water to the face every time when the ball is finally thrown in.

There will be matches played in 21 towns and cities this weekend between the four football league and the top two hurling divisions and in all of them it will feel like there is Something On.

For the duration, nobody will talk ticket prices or handpass rules or John Horan’s bona fides when it comes to the strength of the economy. That can wait until afterwards.

Saturday night offers up a pleasing parallel between football and hurling with a return to big time action for Liam Sheedy in Tipperary and James Horan in Mayo.

Sheedy has been away for longer, yet Horan returns to a game that has arguably seen more changes in his absence. For both men, the season will ransack them for answers in a way their broadcasting careers never could.

Mayo face Roscommon in Castlebar tonight and Horan has named a team that includes seven players who also started his last game in charge, the epic replay against Kerry in Limerick in 2014.

Whether that’s a good or a bad thing, we will only cast judgement upon as we go along. They haven’t lost to the Rossies in a league game this century. They haven’t won a league or championship game in Castlebar since July 2017. Something’s gotta give.

Tipp have Clare for starters in Semple Stadium, having lost their last three games against their neighbours. Okay, last two games – are we really going to die in a ditch for the right to call a Munster League game a game?

All the same, Sheedy will take a dim view of letting a habit become a trend, especially in Tipperary, where the natives need no encouragement in beckoning black into the clouds.