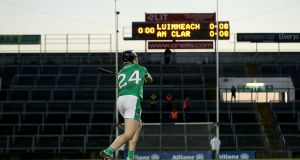 Manager: Colm Bonnar (3rd season)
Selectors: Adrian Corcoran, Conor Phelan and Martin Byrne, coach.
Last good league: Promoted last year for first time in six years.
A great 2018 puts Colm Bonnar’s team into the big time. All players are on board and perennial sharp-shooter James Doyle – 4-1 in last year’s Ring final – gets to probe first-division defences. Depth will be tested by rapid-fire fixture lists. Home fixtures against rivals for survival Laois and Offaly, both of whom they beat in the Walsh Cup, an advantage.

Manager: Mattie Kenny (1st season)
Selector: Eoin Roche
Last good league: Bounce-back promotion in 2013. Winners 2011
Mattie Kenny has something to build on after last year’s respectable championship performances. He will have a fuller deck available with players re-committing and injuries to Dónal Burke and Eamonn Dillon cleared up. The team had a useful run-out in the Walsh Cup. Can he replicate the attacking menace and decision making that hall-marked Cuala’s All-Ireland successes?

Manager: Micheál Donoghue (4th season)
Selectors: Francis Forde and Noel Larkin
Last good league: Winners 2017
In winning the Walsh Cup Micheál Donoghue looked to expand his panel after two years of settled selection. A few of last year’s under-21s have been clocking up game time – and Fintan Burke is another to watch when St Thomas’s club run concludes – as the county looks to retrieve the energy that at times deserted them in 2018. Obvious contenders.

Manager: Kevin Martin (2nd season)
Selectors: Gareth Doorley, Damien Fox, and Cathal Murphy.
Last good league: Pushed Kilkenny all the way in last March’s quarter-final.
Kevin Martin’s team lost in the Walsh Cup to both Laois and Carlow, the main rivals for this season’s relegation spot. Last year’s captain David King is travelling and Dan Currams away but Kevin Connolly and Seán Dolan have returned. Priorities are staying up and a McDonagh Cup exit this summer – which could yield a longer championship than last year’s.

Manager: Páraic Fanning (1st season)
Selectors: Pa Kearney and James Murray
Last good league: Winners 2015
Ground to make up after miserable 2018. Páraic Fanning will be missing Jake Dillon and Maurice Shanahan and Barry Coughlan has retired but the Bennetts are all back and veterans Michael Walsh and Kevin Moran are still aboard. Ballygunner’s club run leaves room for trialling newcomers and Conor Prunty tipped to be the new full back.