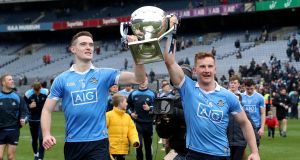 Manager: Mickey Graham (1st season)
Selectors: Dermot McCabe, Martin Corey
Last good league: Division Two runners-up 2018
Graham’s few months as the busiest football man in the country is complicated by the need to find his way around the usual massive turnover of players in the Cavan panel. Six of the 21 who played against Tyrone in last year’s qualifiers aren’t around, including the starting full-back line that day and Seánie Johnston. Could be a rough ride.

Manager: Kevin Walsh (5th season)
Selectors: Sean Conlon, Brian Silke, Kevin Stritch
Last good league: Runners-up 2018
The loss of the Sweeney twins, Patrick and Cathal, will come as a blow to Walsh and he will have to do without Adrian Varley for most of the league with a shoulder injury. The return of Cillian McDaid from Australia is potentially exciting, however, and Corofin’s Liam Silke is back in harness as well. Probably have the toughest schedule in the division, with trips to Dublin, Monaghan, Mayo and Tyrone on their itinerary. Not ideal.

Manager: Peter Keane (1st season)
Selectors: Maurice Fitzgerald, Tommy Griffin, Donie Buckley, James Foley
Last good league: 2017 Champions
Peter Keane’s contention that Kerry won’t be killing themselves to win the league will only buy him so much leeway. Through a combination of high-profile retirements and the jettisoning of the likes of Fionn Fitzgerald, Barry John Keane and Dáithí Casey, an experience gap is there to be filled. The recall of 30-year-old Tommy Walsh is an interesting gamble but Keane’s revolution will be predominantly youth-led.

Manager: James Horan (1st season, 2nd stint)
Selectors: Daniel Forde, Martin Barrett, James Burke
Last good league: Semi-finals 2014
Hard to know what Horan wants out of the spring campaign but for what it’s worth, Mayo tended to give the league a reasonable rattle during his first stint. Obviously a few new faces wouldn’t go astray, so it will be interesting to see how much game time the likes of Brian Reape, Conor Diskin and James McCormack see.

Manager: Malachy O’Rourke (7th season)
Selectors: Ryan Porter, Leo McBride, Owen Lennon
Last good league: 3rd in 2018
Very little has changed. Vinny Corey and Dessie Mone are back for their 17th and 16th seasons respectively, Niall Kearns will miss the league after undergoing a heart procedure before Christmas but is expected back for the summer. O’Rourke will be hoping that forwards Barry McGinn and David Garland can establish themselves but by and large it will be the same faces as before.

Selectors: Ian Daly, Mark Dowd
Last good league: Division Two champions 2018
There are a few swings and roundabouts for Cunningham to negotiate as he settles in. Though the loss of Ciarán Murtagh (for the year) and Seán McDermott (for good) are blows, the return of Seán Mullooly is a badly needed boost in a critical area. Whether or not ex-Kerry forward Conor Cox finds his way into the mix will be worth keeping an eye on.

Manager: Mickey Harte (17th season)
Selectors: Gavin Devlin, Stephen O’Neill, Peter Donnelly
Last good league: 4th in 2018
With four games at home, as well as Roscommon and Kerry away, Tyrone aren’t the worst-looking 8/1 bet in the world. Kyle Coney and Darren McCurry are back in the fold, adding a bit of spice in attack. It would be a surprise to see Darragh Canavan this early, although the advance notices are promising.