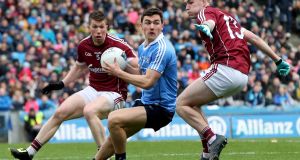 It has been a less-than-ideal overture to the Allianz Leagues, which start this weekend. Publicity about the impending commencement of serious intercounty competition has been disrupted by the low humming of negativity.

Controversy over the experimental rules currently being trialled, the announced increases in admission charges, and the unfair playing burdens on third-level students have all ensured that, after a five-month hiatus, the games make a slightly distracted return to a venue near you.

It can also be easy to forget the GAA is nearly halfway through an experimental competition structure in both football and hurling. League schedules are compressed to leave April free for club activity. Championship starts and concludes earlier and with a round-robin format stitched into both games.

On top of that hurling is to change its league structure with an expanded Division One next year, broken into two groups of “mixed ability”. The upshot of that is that there will be no relegation from Division 1A this year and no promotion from 1B.

And yet. And yet.

There will be a collective sigh of relief from Croke Park that business as usual is breaking out up and down the country and public attention will again be on the fields of play.

It has become commonplace to point out that the leagues have become the best contested and therefore most satisfactory competitions in the calendar. That is because it’s true.

All of which makes the decision to tinker with the hurling league curious. It is no secret that managers in Division 1A were becoming worn down by the unremittingly high levels of that competition, feeling their opportunity to trial and experiment with players and tactics was being compromised in the barrage of elite fixtures and players juggling county and Fitzgibbon commitments.

The emerging trend that counties had a better chance of not alone winning the league from Division 1B ( three times in the last four years), but even the All-Ireland (in both of the last two years), added to the sense of disgruntlement.

It will also be interesting to see how hurling managers react to the evidence of last season’s championship round-robins. A widespread assumption is that they’ll place no emphasis on the league in order to make sure that everything is geared towards the provincial campaigns which begin on the second weekend in May – just over three months away.

Still, what manager deliberately slow-pedals? Yes, Derek McGrath decided to develop his Waterford panel at the risk of relegation – which duly materialised – by selecting as many players as possible but circumstances forced his hand with a high proportion of Fitzgibbon players and injuries.

Ironically, he was undone by more injuries in the summer and the sacrifice of the Division 1A place became a footnote rather than a prologue.

His successor Páraic Fanning will have the advantage of a more relaxed environment, although it would be fairly relaxed anyway in the top division with no relegation.

Managers like Brian Cody and Liam Sheedy will want performances out of Kilkenny and Tipperary and if those are good enough they’ll lead to success. Cody, in particular, went about his business as usual last season while Sheedy’s predecessor Michael Ryan left All Stars on the bench in Nowlan Park.

When the counties met again in the final the expected step up from Tipp never materialised and Cody had another league title on the sideboard – and they weren’t too far away in the championship despite the developmental nature of the team.

Last year we had All-Ireland semi-finals from which any of the four counties could have credibly won the MacCarthy Cup. Cork and Clare know they’re not far off the required standard whereas Galway are fired up by the loss of their crown.

Limerick, armour-plated with the confidence of a first league campaign in 45 years as All-Ireland champions, know how it’s done but now must cope with the demands of success rather than the self-doubts of failure.

Football’s rhythms haven’t been as upset, as it’s business as usual up until the beginning of the quarter-finals in July. Overlaying this year will be Dublin’s march on history and the fabled five-in-a-row. Under Jim Gavin there’s been no demarcation lines between league and championship.

Panel strength has allowed the team to try out different players and continue to win. Yet, Division One is a terrific standard. Dublin don’t lose many but neither do they storm through campaigns; they’re just very difficult to beat.

Their perennial challengers, Mayo, Kerry and to an extent, Tyrone – the quartet have made up three of the last six All-Ireland semi-final line-ups and on just four occasions in that period have other counties intruded – don’t, with the occasional exception of Kerry pop any rivets during springtime.

There’s little reason to expect Gavin to approach the league any differently apart from taking fewer chances with players, who are now heading into their 30s and might be cut some slack. The usual schedule of opportunity will apply but major changes to the championship panel are unlikely.

Dublin aren’t champions because they take the league so seriously; they are able to take it seriously because they have such strength in depth, which also drives performance.

It may be worth reflecting on by the hurling managers that the connection between league and championship success in football hardened from the time the qualifiers extended the championship season in 2001. Since then the rate of winning both titles has doubled to one every two years.

A reasonable explanation is that the football season now demands an even rhythm throughout, not periods of competitive inertia being whipped into hyper-activity at occasional intervals.

Hurling has made the same transition. Last summer Limerick built performance all through the spring before the new championship structure threw up its rapid-fire sequence of fixtures. They lost to Clare in Munster but no county went through the summer unbeaten.

Former Limerick hurler David Breen used an apt comparison to illustrate the old reality. He said that before the round robins arrived, the hurling championship had been “almost like boxing in a way where you go into camp and you prepare for weeks on end for that one game”.

No longer. Counties have to be able to reproduce sustainable performances on a basis, unimaginably more frequent than even two decades ago.

The coming weeks will forge the links with summer.