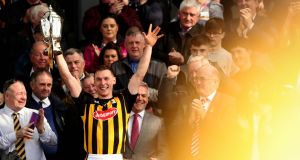 Kilkenny’s Cillian Buckley lifts the trophy in 2018. Photograph: Inpho/Ryan Byrne. All other photos from Inpho

Manager: Brian Cody (21st season)
Selectors: Derek Lyng and James McGarry. Trainer: Michael Dempsey
Last good league: Holders
Kilkenny continue to get the best out of what they have. Absence of Ballyhale players for the league and injuries to defenders Cillian Buckley and Pádraig Walsh will facilitate trialling – Huw Lawlor looks ready for a sustained run – if not prospects. Reliant on established players and in need of a specialist full back and new options in attack. Always competitive.

Manager: John Kiely (3rd season)
Selectors: Alan Cunningham, Paul Kinnerk, Brian Geary, Aonghus O’Brien and Joe O’Connor.
Last good league: Finally secured promotion after eight years in 2018
The youth of John Kiely’s panel and impressive work ethic remain in their favour but being All-Ireland champions brings its own pressure. Séamus Hickey has retired but there are no club distractions this year for Shane Dowling and the Na Piarsaigh crew. Ironically, given the long-sought promotion last year, no shadow of relegation after format change but more demanding fixtures.

Manager: Liam Sheedy (1st season)
Selectors: Tommy Dunne (coach) and Darragh Egan
Last good league: Have topped table in four of the past six years but without a title since 2008
Liam Sheedy’s return has lifted morale but Clare gave a reality check in the Munster league final. Talented panel albeit under-achieving and with mileage. Some decent under-21s are coming through and a fit Séamus Callanan is the new captain. Sheedy won the league at his first attempt 11 years ago but defeat in the last two finals unravelled their season.

Manager: David Fitzgerald (3rd season)
Selectors: Seoirse Bulfin, Stephen Molumphy, Keith Rossiter
Last good league: Semi-finalists the last two years and in 2017 beat Kilkenny in Nowlan Park for the first time since 1957.
Slippage last year and debate continues whether defensive shortcomings justify a sweeper at the expense of attack. Fitzgerald has a stack of players tied up in Fitzgibbon but also a lively prospect in Séamus Casey from the under-21s. Performance and progression in the knock-out stages would benefit confidence and three home ties, against Limerick, Tipp and Kilkenny, is an advantage.