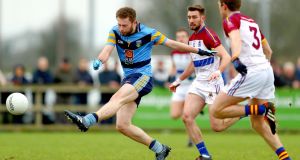 Reigning champions UCD will defend their Sigerson Cup crown in the final after they saw off UL in an excellent encounter at the Connacht Centre of Excellence in Knock on Friday.

UCD were clear favourites coming into the weekend, and the record holders will now face St Mary’s in the decider on Saturday.

With UL leading 0-7 to 0-6 at half-time, Dublin forward Paul Mannion made the difference for UCD in the second half, when he scored a penalty in the 36th minute, while two late points from Monaghan youngster Conor McCarthy sealed the win for the Dublin college.

John Divilly’s side played against the breeze in the first half, but they began well and points from Barry O’Sullivan and Eamon Wallace gave them an early lead.

But UL hit back with two frees from Niall McDermott and Brendan O’Keefe, and they gathered momentum from there.

McDermott scored his second and third points of the half, and Fergal Boland was also a major influence up front as UL took a one-point lead into the interval.

But UCD used their bench well in the second half, even though it was their star man Mannion who slotted the penalty six minutes after the break.

He left the field shortly after with a minor hamstring strain, but he isn’t expected to miss the final.

UCD were on the backfoot when UL hit three points in three minutes from the 40th minute, the scores coming from McDermott, Denis Daly and Michael Geaney.

But UCD held their composure and used all their experience to grind out the victory. Barry McGinn put them back in front, and McCarthy kicked two further points as UCD held a two-point lead entering the final minutes.

UL had one more chance, only for midfielder Gearoid Hegarty to blaze his goal chance wide with the last kick of the game.