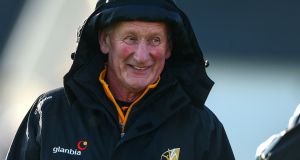 With the growing likelihood that the GAA will introduce or at least propose some deterrent for cynical or calculated fouls in hurling, the small ball community comes face-to-face with the uncomfortable prospect of being treated – well, a bit like football.

Over the years, relations between the codes have been rather like a caste system: the noble, culturally superior and ancient craft of hurling as against the rough, uncouth and at times morally dubious pastime of football; a distinction knowingly seen to crystallise in the broader popularity of the latter.

After more than a century of being played to much the same set of rules, the games diverged on the very issue of cynical fouling when the black card was originally introduced seven years ago next month. It was a major intervention, courtesy of the Football Review Committee (FRC), under the chair of the late Eugene McGee.

One of the reasons the initiative had been undertaken in football was that in its extensive consultation process, the FRC had learned that the prevalence of such fouling with effective impunity was identified by thousands of respondents as the primary issue in the game.

They’re talking about promoting hurling and trying to keep it alive. Well, this will kill it

Despite much loud grumbling, the sanction – forcing the replacement of the offending player – resulted in the near extinction of the third-man tackle, the deliberate body colliding with a player about to take a pass in an attacking movement.

It was probably just as well that a body dedicated to reviewing football took charge of this because it meant that hurling would be outside of the remit. It was explained at the time that hurling didn’t have the same problems with cynical play but there was also the realpolitik of the situation.

Whether hurling had such a problem or not may have been a moot point but within hurling counties this was fervently purported to be the case. Therefore, a good way of ensuring that the reform never saw the light of day on a playing field was to extend its provision to both games.

We have a fair sense of this because the genesis of the disciplinary reforms of 2013 was a report and recommendations of the 2008 Disciplinary Task Force, chaired by future GAA president Liam O’Neill, who made a strong presentation to a special congress, using video examples of what were categorised as “highly disruptive fouls” to argue the case for dismissing the offender but allowing a substitute replace him.

The infractions are familiar as prototypes of the FRC measures but they were also intended to apply to hurling: pulling down an opponent, tripping an opponent, deliberately body colliding, bringing and arm or hurley around the neck of an opponent, wrestling on the ground and away from the play and remonstrating aggressively with match officials.

The 2008 proposals were in themselves a revisiting of experimental rules trialled during the 2005 national leagues. These also applied to both hurling and football and were again recognisable infractions: off-the-ball, professional (preventing goal scoring opportunity), joining a melee, verbal abuse of match officials.

They were initially punished by the sin bin, until that sanction was unceremoniously ditched because of discontent amongst football managers in the January pre-season competitions.

The new punishment was compulsory replacement, as would become the case with the black card for its first six years (until, ironically that was changed on the recommendation of the Standing Committee on the Playing Rules (SCPR) last year).

So you had a prototype black card operating in hurling 15 years ago. How did that go? Not well.

Kilkenny manager Brian Cody has always been sensitive to anything he regards as diminishing the game’s ‘physicality’ and he was almost thunderstruck by the provision, commenting after a match against Dublin: “But basically they’re trying to take genuine, man-to-man contact out of the game. That’s absolutely off-the-wall. They’re talking about promoting hurling and trying to keep it alive. Well, this will kill it.”

Although it’s not certain that he would have found the sin bin any more palatable, Cody wasn’t alone in seeing the experimental rule as being forced on hurling by disgruntled football managers.

For instance former Wexford All-Ireland winning manager Liam Griffin condemned the GAA: “This is the Gaelic Football Association with hurling tagged on,” he wrote.

Football’s decision to tackle cynical fouls has, however, made it almost certain that hurling will ultimately have to face up to the same challenge. Increasingly, these sorts of fouls are being highlighted in hurling and the lack of adequate sanction noted.

At January’s annual GAA Games Development Conference, David Hassan, chair of the SCPR, said that research had indicated that the level of cynical fouling in hurling was at least as high as in football - if not higher, given the lack of deterrent.

It is expected that a proposal to bring the games into line will be advanced in the near future.

Last weekend’s ‘Allianz League Sunday’ featured a brief discussion between hurling panellists Derek McGrath and Jackie Tyrrell in which they responded to various incidents in the second round of matches.

For instance, Bill Cooper’s take-down of Mark Kehoe in the Cork-Tipperary match would be a stone-cold black card in football. On this occasion it was a penalty, which these times in hurling nearly always results in a goal and did here as well, but the fact is that it was worth a punt for the defender.

Neither McGrath nor Tyrrell wanted to go down the same road as football – the latter saying that he didn’t think cynical play in hurling was “as bad as in football when the black card was brought in”. There was consensus that the sin bin was too radical a move.

Yet both discussed measures such as awarding penalties for any foul within the 45-metre line, acknowledging that the rules punishing such behaviour are at the moment inadequate.

Which is, we can suppose, a start.