The wily Brian Fox wins it for never-say-die Tipperary 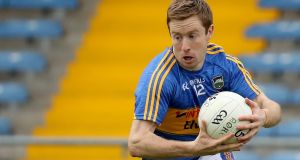 The wily Brian Fox came up trumps in additional time for Tipperary as David Power’s side came from behind to secure a valuable two points on the road against Louth in Drogheda.

With less than 10 minutes on the clock and the wind at their backs, Tipperary trailed by four points, but they composed themselves enough to rattle off five unanswered scores to engineer victory.

Replacement Alan Moloney’s influence cannot be understated. With Tipp running out of ideas, Moloney found his range with two swirling points from distance in the middle of the scoring sequence to drive the visitors into the ascendancy.

The defeat was harsh on Louth, who were competitive throughout. Leading 0-5 to 0-2 at half-time they looked set for their first home win in a year when midfielder Tommy Durnin found the net upon the resumption.

Tipp knuckled down, though, and piled enough pressure on Craig Lynch’s kick outs to allow Fox to come up with the goods at the death.