Joanne O’Riordan: The GAA rules the roost in Slaughtneil 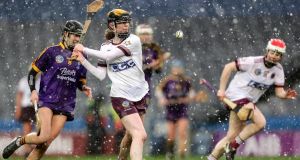 It’s incredibly rare to live through a batch of teams dominating across different sports – Liverpool in this year’s Premier League, Lyon in women’s soccer, Dublin in GAA football. Yet camogie clubs are looking at a dominance that many would deem inspiring or setting a precedent for other clubs.

Over the weekend – in case anyone missed it in a jam-packed weekend of GAA – Slaughtneil advanced to their fourth straight All-Ireland camogie final after beating Clare side Scarriff/Ogonnelloe. Slaughtneil will face old foes Sarsfields in a repeat of the 2017 and 2018 finals.

Yet life was never that simple in Slaughtneil in terms of camogie.

Having been in the company of All-Ireland winning captain Aoife Cassidy a number of times, Slaughtneil really are at the heart of the community. During the previous All-Ireland run Slaughtneil held a meet-and-greet with the whole community. The fact young girls were able to pinpoint a hero that they could relate to was significant, yet the fact these heroes lived next door, worked nearby and are so accessible makes the difference.

The success of Slaughtneil has been met with raised eyebrows. How can a club maintain success at dual level in men’s football and hurling, while having a strong camogie team?

More importantly, how can a village in Co Derry with just 350 people living there have enough people to maintain that drive, commitment and determination to keep three teams going at a top level?

Slaughtneil got their first taste of success in 2012 in camogie when they won their first county title. In 2014, Thomas Cassidy and Dominic McKinley took over, and as a duo created a team built for the future. Dominic McKinley added a bit of strength and conditioning and tactics, while Cassidy mainly did the rest.

Then mix this with the community’s rich cultural sporting heritage and a steely determination, irrespective of whether the team were deemed underdogs or not.

Heroes come in all shapes and sizes, and without a doubt sitting down and listening to Aoife Cassidy go through her GAA obsession and Slaughtneil it’s incredibly difficult to not go away feeling like you are going to move mountains.

The three Cassidys on the camogie team, Eilis, Aoife and Brona, all effectively grew up playing hurling with the boys at under age – some of the current men’s senior team agree at times they were actually better than the boys.

Some 12 years ago Aoife Cassidy and Co were on the club’s U-14 team that reached the Division 2 quarter-finals at Féile na nGael in Laois/Offaly. Slaughtneil hurler Cormac O’ Doherty claims Cassidy was probably the best on the field. It also helped that two of the Cassidy brothers are current dual stars for Slaughtneil.

You can’t mention Slaughtneil without stating that the GAA is everything. There’s a community centre which has an arts and crafts store, an arts theatre in two buildings, a school and the famous GAA clubhouse and pitch.

Sitting at the bottom of the Sperrin Mountains, Slaughtneil is immersed in Irish culture and Gaelic vibes. John Spillane and Sharon Shannon have played there, the discos in the GAA club were well known in the 1980s, and generally the GAA kept the young ones occupied. Central to the whole thing was the Cassidy family.

Thomas Cassidy is synonymous with Slaughtneil, and many stories are told of how he effectively made the club and village into what it is. How he sold a car to buy a bus to bring people to games, to being one of the founding members of the community centre, to his final few days when, despite being on medication and quite ill, he was at the pitch when Aoife lifted the county trophy in 2017.

After drawing with Loughiel on the same day the hurlers created history by winning the Ulster title, the Cassidys and Slaughtneil lost their hero Thomas Cassidy. Slaughtneil beat Loughiel in the replay, and despite it being a joyous celebration the mood was also sombre. Yes, a hero was gone, but the legacy and culture he and others cultivated lives on.

Commitment, motivation and steely determination are the things usually associated with Slaughtneil. Throughout my chats with Aoife, when discussing Slaughtneil, “unreal” was the adjective most used to describe the success and legacy of this team.

Slaughtneil have won the last three All-Irelands, with one being played in Croke Park on a historic day for club camogie. They have beaten Sarsfields twice and Wexford’s St Martins. On March 1st, they renew their rivalry with Sarsfields, who will try to ensure the result is very different.

While unreal is how Aoife describes the whole experience, inspirational comes to mind.

Slaughtneil have a different mindset – if there is no precedent, they’ll be the precedent.