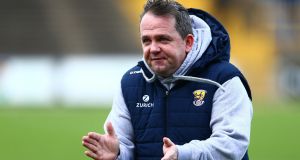 Wexford Senior Hurling manager Davy Fitzgerald: ‘He is who he is and I am who I am and that’s grand.’ Photograph: Tom O’Hanlon/Inpho

There was no handshake in Wexford Park, but neither was there very much drama. Brian Lohan’s Clare side won the day on the road against Davy Fitzgerald’s Wexford, and you suspect that the best part of the day for both managers was getting it out of the way. Clare came out with a 0-18 to 0-15 win, and all the pre-match hubbub about the falling-out between the two managers fell away.

“People can write what they want about me and Brian Lohan, ” said Davy Fitz afterwards. “It doesn’t bother me in the slightest. He is who he is and I am who I am and that’s grand. That will never come into it with me. I am a Clare man, I am a proud Clare man and I will always be a proud Clare man, but I am manager of Wexford and I love what I do down here.

“Well done to Clare. They won the game, so very little I can say. Am I disappointed? Of course I’m disappointed. There’s more in Wexford than what we showed today. They fought very hard but I thought the period coming up to half-time when we brought it back to three points, that last seven or eight minutes we let them pick off five easy scores.

“That was disappointing. Clare showed great resilience and well done to them today. They fought really hard. To be totally honest, Clare winning today – fine. If it was the middle of May or June I might be a bit panicked or disappointed.”

Elsewhere, Limerick ran up a 1-19 to 0-14 win over Galway, while there were comfortable wins for Kilkenny, Waterford and Dublin.

In matters football, the result of the day in Division One was Monaghan’s 1-12 to 0-11 defeat of Tyrone in front of a capacity 7,500 crowd in Castleblayney. Karl O’Connell’s second-half goal put clear water between the teams, and a four-point haul from Conor McCarthy saw Monaghan ease home.

“It was very disappointing,” said Mickey Harte afterwards. “We probably felt we didn’t play particularly well in the first half and hoped we’d play better in the second. but it didn’t transpire that way. I suppose it was a challenging game because it was always nip-and-tuck, but once they got the goal I suppose the game was allowed to be played on their terms then. So we have to put our hands up – there’s days like that when you go out and expect to do better and you think you have prepared to do better but it doesn’t go your way.

“We had more unforced errors than we would like to have. We didn’t protect possession the way we ought to do and that put us on the back foot too often. And whenever Monaghan had the upper hand, particularly when they had a good lead, they played the game on their terms and we had to try and chase it, which made it easier for them to suck us in and hit on the break. That’s the way the world is nowadays: if you don’t take the chances when they are there you probably pay the price.

“If we had got a few scores or managed to get a goal we might have had more of a spring in our step. It’s not a case of just being as blunt as that and say they looked fresh and we looked jaded. But at times I can see why you would say that. It think even in the last 10 or 12 minutes, when we were really well down, we got back a number of points to take the bad look off the scoreboard. We probably could have got more during that time but it would have been a false result, really. We were well beaten on the day.”

Donegal went top of Division One with a 3-9 to 0-8 defeat of Meath in Navan. Comeback of the day belonged to Fermanagh in Division Two, meanwhile. Ryan McMenamin’s side were 0-9 to 0-3 down to Roscommon at the break, but chased down the Connacht champions to leave matters level in injury-time. Ciarán Corrigan popped up to ice the winner in the 73rd minute to send Brewster Park into orbit.

As ever, Division Two is already a bearpit, with Clare’s 0-11 to 0-10 win over Kildare leaving the way clear for Laois to sit on top as the only unbeaten team after two games.