Number one Brennan steps into the breach for Meath 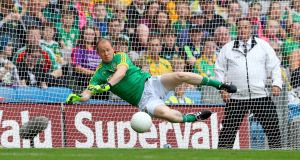 Marcus Brennan: had moved into a coaching role over the winter but in Andy Colgan’s absence is now Meath’s first choice ’keeper again. Photograph: James Crombie/Inpho

Veteran goalkeeper Marcus Brennan looks set to be Meath’s goalkeeper for the rest of their Allianz Football League campaign.

A remarkable 11 different goalkeepers have been used in competitive games by the Royal County in just over three years under manager Andy McEntee.

Regular goalkeeper Andy Colgan injured his knee in the warm-up before the Tyrone game last month and required surgery. That led to Dominic Yorke’s league debut against the Red Hands though he was replaced at half-time by Barry Dardis, normally a forward.

Dardis was then named to start against Donegal last Sunday with Yorke on the bench but neither actually featured as 35-year-old Brennan was drafted in before the throw-in.

Brennan, who was in goal for Meath in the 2002 All-Ireland minor final, fared well generally despite leaking three goals, saving a penalty from Michael Murphy.

Asked if Meath will be sticking with Brennan for the foreseeable future, coach Colm Nally nodded. “I’d imagine we will,” said Nally. “With Andy injured, our other ’keepers are quite young so Mark is in there to kind of help them and guide them along.”

Brennan made his championship debut when he replaced the black carded Colgan against Mayo at Croke Park in last year’s Super 8s. He then started against Kerry in Navan before moving into a coaching role over the winter though he is now their first choice ’keeper again and looks set to start against Mayo this Sunday.

“Marcus is a good mentor to the other lads but now he’s got a dual role as such,” said Nally.

As for Colgan’s recovery, Nally said he’s likely to be out for “five or six weeks”, leaving him unlikely to feature in the county’s first top flight campaign since 2006.

It’s the latest injury setback for the Royals who are without last year’s top scorer Mickey Newman for the campaign following hip surgery while Séamus Lavin, Pádraic Harnan, Shane McEntee and Shane Walsh are shorter-term absentees.