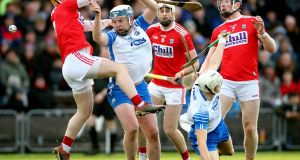 Stephen Bennett is cautious. Even after an all-action afternoon, which had him raining arrows down on Cork – 20 shots at the posts – and ended in a good win, he acknowledges that the team had earned a little scepticism and can understand if it takes a little while to dispel.

“You wouldn’t blame people for thinking we weren’t going to win – we haven’t won a [championship] match in two years. Look, it’s only a small step. It was nice to win the game but it was disappointing to be six points down three minutes into the game and then you get to five points ahead and then back nearly level again.

“We know we have a lot to work on but we worked hard, which is always nice to see. Things will happen if you’re actually working for it but we got to the league final last year and you saw how the championship went so I don’t know how much you’ll read into it either.”

There’s little doubt that amongst the biggest lifts in morale on the opening weekend of the Allianz Hurling League came in Walsh Park, Waterford where the home team, beleaguered by two win-less championships in Munster, emerged from a scarifying opening three minutes, which saw them punctured by two goals, to rally, recover and beat Cork.

Bennett hit 0-11, including frees, a 65 and three form play. He also managed to drop three shots short and send another six wide. It was a pillar display in an inexperienced team and earned him the TG4 Man of the Match award.

His energy could be seen in the tireless dropping back to trigger a more defensive alignment when needed and the roving role probably didn’t help accuracy.

“At times, I probably came too far out,” he says, “but yeah, we just tried that. We can all shove back one – I think that’s the way teams are playing now. It was very enjoyable there but I was disappointed – I’d say I had about 20 wides!”  It was also a great afternoon for the family, as his brother Kieran also had a storming match, scoring 0-5, four from play and a sideline cut. The older Bennett made national prominence when introduced as a late addition to the Waterford team before the 2017 All-Ireland final but has also delivered some high-scoring performances for his club.

“He had a brilliant game,” says Stephen of his brother. “He had a great year with Ballysaggart and he’s confident. It’s tough – one bad game and another fella will stand up. He was brilliant but it’s no good if he doesn’t go out next week and do the same thing. We need to push ourselves on and we have to players to do that.”

Bennett, 24 this year, has been plagued with injuries since a stellar underage career. He won minor and under-21 All-Irelands with his younger brother Shane – who’s not involved with the seniors this year but took a while to break through himself at senior.

Last year, though, thriving on the responsibility of assuming free-taking duties in the absence of Pauric Mahony, who was helping Ballygunner to reach the All-Ireland club semi-finals, he was top scorer in the league, with 4-76, as Waterford reached the final but lost to Limerick.

The county’s inability to build on the 2017 All-Ireland final appearance has been complicated by an annual change in management. Derek McGrath stepped down in 2018 after five years in charge, Páraic Fanning went after four straight defeats in Munster and now former Tipperary All-Ireland winning under-age manager Liam Cahill has taken charge.

“Fellas had respect for him as soon as he came in. It’s a very professional set-up. Everyone is happy and they’re just trying to get onto the 26. There are lads not on the 26 this week that could be starting next week.”

Cahill took some controversial decisions to drop well-known players, such as three-times All Star Noel Connors. Sunday’s team featured four debutants, who did well with Iarlaith Daly, a teenage wing back giving a particularly good display.

“A few lads were making their debut and they haven’t had the experience of losing so they’re confident. Iarlaith Daly who is 18, Jack Fagan, a few fellas like that stood up and they were hurling like they were back at home.

“You need to find one or two fellas and the only way you’re going to find out if they’re good enough is to throw them out there and see. Small steps but we know we have a lot to work on.”

After the match Cahill spoke about the team finding its identity and with established names to come back, such as former Hurler of the Year Austin Gleeson, nominee Jamie Barron, Kevin Moran and Pauric Mahony, that process should quicken.

LA Rams see off Chicago Bears in a battle of the defences 08:45
Gerry Thornley on size of Ireland’s Parisian task; Son the star for Spurs again 07:48
Eddie Jones says he can’t guarantee England players will follow Covid-19 rules 06:55
Drogheda in the driving seat as Division One reaches a thrilling finale 06:00
Regionalisation may be the key as league adjusts to new reality 07:52