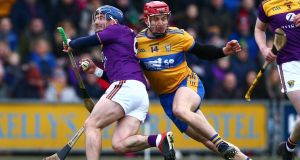 Away from all the Sicilian stuff, this Allianz Hurling League tilt turned into an absorbing contest with Wexford simply running out of road as they tried to harness a second-half gale and chase down 14-man Clare before an estimated 6,500 in Chadwicks Wexford Park on Sunday.

The much-publicised Fitzgibbon Cup feud between the managers and Davy Fitzgerald’s taking on his own county may have made it a win to savour for Brian Lohan in his first season in charge but there were more tangible reasons for satisfaction on the field.

It was a nail-biting win in the face of adversity and preserved Clare’s 100 per cent start to the league. If its outstanding influence was Tony Kelly, who shot 0-12 through flawless free taking and a couple of inspirational points from play as the pot simmered in the final quarter, there was enough in the other performances to please the manager.

His re-deployment of players worked well and he was especially happy with David Fitzgerald’s switch to centre forward progressed after a three-point tally from play and an overall combative display.

“Yeah, David works so hard and he’s so honest. He just wants to deliver for the team the whole time.”

Clare’s bright opening – they led by six after 12 minutes – had faded and by the time their captain John Conlon was red-carded in the 29th minute for a head-high challenge on Kevin Foley, the lead was down to three, 0-6 to 0-3.

Conlon may have been unlucky but Lohan accepted afterwards that such tackles are now risky business. Referee Seán Cleere had arguably been lenient on Clare corner back Eoin Quirke after he had earlier caught Cathal Dunbar with a previous head-high rattle.

It had been a scrappy encounter, not helped by the wind, and the preponderance of the scores came from frees.

Unexpectedly, given their apparent plight – they still led by only three as late as the 32nd minute – Clare rallied in misfortune and reeled off five unanswered points to make the Leinster champions’ second-half task a little harder, at 0-4 to 0-12.

The GAA employs its own Beaufort scale and on it, the characteristic gusts that blew through the venue would have been conservatively set at an ‘eight-point breeze’.

Wexford started as if they were going to blow away the deficit in no time. Like Clare in the first half, they ran off an encouraging sequence of scores in the opening 12 minutes and when goalkeeper Mark Fanning emerged from goal in the 46th minute to take a crossfield pass and, harnessing the wind, launch it over the bar from around his own 45, the deficit was down to a score, 0-9 to 0-12.

Clare then gave notice that they weren’t going to roll away. Aidan McCarthy’s dynamic run ended in a free that Kelly sent the way of all of the others to extend the lead – and that became a pattern.

With nearly an hour gone, however, Wexford closed to within a point, 0-13 to 0-14, and when they were awarded a straightforward free, it looked like Clare would be caught. That might have provided the necessary momentum shift but Jack O’Connor missed the shot. That’s not to saddle him with the blame – the team managed 13 wides compared to the visitors’ three – but Clare responded to the let-off with Kelly pushing the lead out to two almost immediately.

They were like the electric hare, going slowly enough to encourage pursuit but just fast enough not to be caught.

Despite that, there was never more than a score in it and deep in injury-time Aidan Nolan tried to place a dangerous cross into the square but McCarthy blocked.

The managers were asked about the state of relations. Fitzgerald deflected a bit:“Listen, that keeps ye boys busy for the week; it’s nothing to do with me whatsoever.” – but Lohan just said: “No,” when asked had he spoken to his counterpart.

Fitzgerald – who name-checked a good few players he had to return, including last year’s joint-captains Lee Chin and Matt O’Hanlon – was also asked about the critical period before half-time when his team conceded a sequence of scores despite having a man advantage.

“The mentality – we talked about that at half-time. They were waiting for stuff to happen. That period just before half-time was actually our fault. We took the foot off the gas, so we did, and we thought because we had the extra man . . . ”

He felt that they had countered Kelly well at first but conceded the influence of his former charge.