Ricken confident Cork football is back on the right track 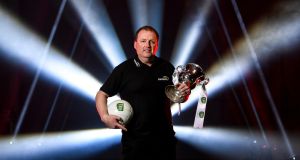 Keith Ricken: “I travel the county and it is a real good football county too, they love their football. You always have goodwill down there and and goodwill towards it.” Photograph: Brendan Moran/Sportsfile

Around this time last year, Keith Ricken was just in the door as Cork under-20 football manager, a rushed appointment that summed up the chaos in the county.

Páirc Uí Chaoimh was closed, the flagship senior footballers were on their way to being relegated to Division Three and when the minor championship started, Cork were tonked by Kerry.

A few months later, the minors won the All-Ireland, as did Ricken’s under-20s and the seniors rediscovered their mojo to surge to the Super 8s.

Fast forward again to the present and Cork have two wins from two in the Allianz Football League while Páirc Uí Chaoimh, according to John Maughan at least, has the sort of surface now you’d expect to wear slippers on.

Somewhere in the very centre of all that agony and ecstasy lies Ricken, a man bemused by the boom and boost news cycles that seem to prevail not just in Cork but throughout the GAA world.

It’s all pretty simple for him, you prepare the players and then send them out. After that, whatever will be, will be.

“It’s about the three Gs – gear, grub and games, they’re the three Gs and they’re what every young fella wants,” said Ricken at the launch of the Eirgrid under-20 football championship.

“In my day, it was G for girls as well but now they’re so focused on football so we’ll leave the girls away for a sec but if you have gear, grub and games, once you deliver those three things, lads are happy.

“It’s a very simple operation but I can see in parts of the association and with some of the counties, maybe some of the bigger counties and the smaller counties where they’re trying to progress, it’s more money, throw more money at it.

“It’s costing people a fortune and then at inter-county level that’s going up and up and up and there’s no end to it. It’s like a juggernaut, where’s it going to go? I think as an association we need to come back to reality.”

It was this simple philosophy that elevated Ricken’s under-20s to All-Ireland success.

“When I took over it was all very last-minute dot com,” he said. “It was a bit helter skelter and you get to my age and you say to yourself, ‘Jaysus, am I able for all this? You also wonder, ‘Am I the right man for this job?’ Then you get all these phone calls about nutritionists, strength and conditioning, there was a list of stuff.

“I didn’t know what some of the words meant. It was overwhelming and I was saying, ‘Christ, I’m overwhelmed by all this, I’m not able for this at all’. Then I just sat back and I wrote it all down, ‘What is it all actually about?’ I came back and took a very simple operation and we happened to win the thing out.

“One of the things that I got great pleasure from after we won it was I rang all the f***ing people that had rang me in the first place. I said, ‘What was that stuff about again?’ In other words, making a point that we had a very simple operation and we had very good people and very educated people involved.”

The supposed death of Cork football was clearly greatly exaggerated.

“I was kind of smirking at Donal Óg [Cusack] the other night on the telly saying it’s a hurling county,” said Ricken. “I travel the county and it is a real good football county too, they love their football. You always have goodwill down there and and goodwill towards it.

“But there was negative talk, it was doom and gloom. For me, there’s always gold in the river, all you have to do is sieve it, it’s just a matter of getting to the right spot.”

Ultimately, for Ricken, it isn’t so much about making Cork football great again as making great people within Cork football.

“It’s a five-year plan, how many players get through and when they do come through, what type of guy will they be?” said Ricken. “Not what type of player will they be. It’s will they have their s**t together? Will they be educated? Will they be humble? If we don’t have an ideal, what do we have? What’s the purpose of the association?”

1 TV View: Roy Keane but Daragh’s keener as Late Late fails to shoot the lights out
2 Ireland Slam England at the Gardens to open up Grand ambitions
3 McIlroy produces strong finish to stay in sight of DeChambeau
4 Eddie Jones: back three will deal with Irish aerial threat
5 Solskjær backs Martial to get 20 goals for Manchester United for first time
Real news has value SUBSCRIBE

Donegal facing stern test of their credentials at Croke Park 06:00
Matt Williams: Ireland will need to step up on Wales display to prevail at Twickers 06:00
England v Ireland preview: Ireland’s revival to face its sternest test 06:00
Rare chance for Dublin to shine at Croke Park as they host Wexford 06:00
Sexton unfazed by the prospect of physical showdown at Twickenham 06:00
Crossword Get access to over 6,000 interactive crosswords