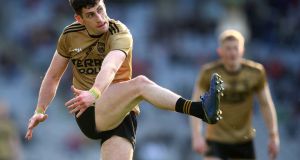 In a strangely frank confession Paul Geaney admits he not once but twice saw his first championship match of 2019 flash before his eyes.

Firstly, when sustaining the most unlikely of knee injuries in the immediate aftermath of Kerry’s league win over All-Ireland champions Dublin, back in February; secondly, when realising Liverpool had just secured that most unlikely of Champions League final places last Tuesday night.

Geaney is, naturally, being a little mischievous about the latter, only as a “big Liverpool supporter”, it quickly dawned on him that Champions League showdown against Tottenham was set for 8pm in Madrid on the evening of Saturday, June 1st – an hour after the throw-in in Kerry’s Munster football semi-final against Clare at Cusack Park.

“Nah, when it comes down to it, I’m a Kerry supporter first and foremost,” Geaney says with a smile. “That’s where my interest will be that day. Look, I’ll watch it the Sunday . . . as long as Liverpool win I’ll take that.”

There was however some genuine fear Geaney may have missed Kerry’s opening championship match, and possibly even the season, when he felt a definite snap in his knee after two players, one a team-mate and the other from Dublin, collapsed onto him during the gently aggressive pushing and shoving that began shortly after the final whistle. Kerry won by a point, but neither team left the field in Tralee without helping themselves to a few afters.

Speaking at the launch of AIB’s sponsorship of the football championship, Geaney admits it could have been worse.

“I’d picked up an injury in a challenge game the week before the league, played the first three games with a slight rib/back injury, but was kind of in limbo territory, where you’re alright to play but you’re never going to be 100 per cent and playing your best stuff.

“Then right after the Dublin game I got that knee injury, just going off the field there, a body or two fell on me. I did some small ligament [damage] there on my knee, there was a bit of cartilage as well so I just got a tidy up on that. It was certainly the strangest injury I’ve picked up on a field, having not been in competition.”

Geaney had actually been substituted before the end, thinking his work for the evening was done; after the pushing began he moved in to help Peter Crowley off the ground.

“And I ended up like a turtle on the ground with my legs in the air. Two fellas fell on top of me, into the side of my knee. I felt it straight away, thought I was in more trouble than I was. I was thinking, ‘My year is over here’, luckily it wasn’t.

“It was basically a nothing thing, it just wouldn’t clear up so I had to get a tidy up. It could be worse. Peter Crowley was playing a club game last month and did bad damage, I’m not sure what he’s looking at, but he’s a big loss for us.

“I got a tidy up on the knee after that, it kept me out pretty much until the league final. I got 10 minutes in the league final then but I was happy to get that because I knew I had a chance to be involved and I was delighted to be involved. It was just a freak thing. It was a weird sensation, I was kind of light-headed and stuff. I was like, ‘Yeah, this isn’t good’. Then I woke up on the Sunday and I couldn’t move. I was very bad on the Sunday. The Monday then I was walking again so it was just one of those strange things.”

Not too unlike that Liverpool comeback against Barcelona then: that clash of games does draw the suggestion the Munster Council might actually consider earlier throw-in times, given Cork also play Limerick that same evening at 7pm, in the other semi-final.

“I’d say there will be a lot of other supporters that might have to pick one or the other. It will be interesting, but as far as we can see it’s 7pm on the day, and that’s what we’ll prepare for. But that’s up to the provincial councils to be deciding.”