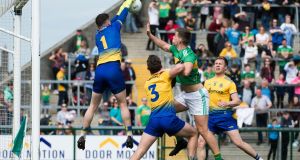 Sunday in Dr Hyde Park ran along such overwhelmingly predictable lines that it made me wonder to what extent the border rivalry is still alive. Photograph: Evan Logan/Inpho

“Pleasant” was the word that sprang to mind at the Roscommon-Leitrim championship derby on Sunday. There was a lovely crowd and the day was nice. But the game itself was over as a contest early on and, despite Leitrim’s excellent league showing, Roscommon had too much for them.

One of the great surprises to me when I was involved with Roscommon was the level of anxiety with which many people in the county seemed to approach Leitrim games. Even during the week, people in Roscommon clearly saw this as a real challenge even though the game was in Dr Hyde Park. There is this deep -rooted, long-standing local rivalry of which I hadn’t been fully aware despite living in the town for many years.

You’d constantly hear this refrain: “Well, we have a big rivalry with Leitrim.” Or: “Oh God, I don’t like paying them in Carrick at all. We struggle against them always.”

I was fascinated by this and I looked it up to discover that Roscommon have never lost a championship game to Leitrim in Carrick-on-Shannon. But this is just one of the intense, complex local rivalries deeply embedded in the GAA and which has always given the provincial championship its kinetic energy.

Sunday in Dr Hyde Park ran along such overwhelmingly predictable lines that it made me wonder to what extent the border rivalry is still alive.

One of my most memorable introductions to the power of the local rivalry was in 2006 when I was covering a game between Tyrone and Derry in Omagh for RTÉ television.

Like most people, I knew that they had history but to my mind, at that point in time, Tyrone were in a different league; they were All-Ireland champions, they were young, the manner of their win the previous September meant that they were the talk of the country. But in the ground that day, that disparity did not exist.

There was genuine concern among Tyrone fans. Equally, there was a real defiance among the Derry crowd and an expectation that their team would take Tyrone on physically and impose themselves. In attitude, it was the last remnants of the Eamon Coleman era. And both sets of crowds did not really like one another.

The idea of losing was unconscionable. The atmosphere was almost feral. The tribalism was absolute. It is an amazing thing that 20 yards of land can create this intense contrast in loyalties and emotions. But the atmosphere that day was extraordinary. There was a sense that all bets were off; this was a day in which anything could happen.

And lo and behold, Derry came out and won by six points. I remember wondering where that had come from; for how long had that Derry team been thinking about and planning that one game. Once the fixtures were announced, they had six, seven months to think about it and talk about it and prepare.

Tyrone became their reason to be and they would have been conscious of the portrayal of those players as champions. And afterwards, there was an unmistakable sense of a significant shift: the champions had been beaten and that changed everything. That was the power of the local rivalry, the potential for this unexpected shock.

It’s probably the elemental thrill of the football championship: the possibility that one county will defy form and tradition and use the energy of that rivalry to take their neighbour out. In the 1980s and 1990s, I think those days were quite common. There was less information available then: teams could train away in seclusion, maybe spring a debutante player and pull off an ambush in the sun. But over the last decade, they are an increasingly rare occurrence.

On Sunday, we had an extremely good performance from Offaly who came close to what would have been a considerable shock against Meath in Navan.

Had Niall McNamee managed to finish the goal chance he worked, then that game would have been over. And Limerick’s win over Tipperary was a huge surprise because Tipp’ are regarded as a top 12 team. But I think the idea of the All-Ireland champions being taken down in provincial games is becoming increasingly remote.

And yet, the siege mentality remains hugely important to teams. Returning to Roscommon, they face Mayo next in the Connacht semi-final. And so they are entering into a bigger and historically more troubling rivalry. For whatever reason, Mayo are comfortable with the idea of playing Roscommon, who haven’t won in Castlebar since 1986.

I was playing in that game and it was precisely the kind of shock I’m talking about. Mayo had had a big year in 1985 and we were expected to follow up and then Roscommon just turned us over and ended our summer. But in recent years, the sense of rivalry has been diluted by the fact that Mayo win. The fixture has lost its lustre.

This is partly to do with managers taking mythology out of the equation. In Mayo, for example, the big psychological stumbling block was always Galway. We had this attitude that we could take on anyone but that Galway would somehow get the better of us. In my playing career, we met Galway in seven championship games. I think it’s fair to say we probably had a better team in five of those years. But we lost every time.

It was part of our received knowledge that Mayo teams struggled with Galway. In contrast, Roscommon seemed to love playing Galway. I couldn’t get over it. They relished it – they always sensed they had a chance and that definitely fed into the approach in 2017 when I was managing them.

The attitude becomes embedded in the county itself. It is inherited and passed down through kitchen table conversations and stories told in the car and in the pub. It’s a national thing. You hear Donegal people say, ‘oh, we struggle with Monaghan’. Or Monaghan dreading playing Tyrone. It becomes part of the narrative of these local rivalries. And it can become a self-fulfilling prophecy.

But the evidence suggests that the combination of mythology and those genuine out-of-the-blue shocks are disappearing from the game. There is so much information now and preparation and the stronger teams so well drilled that games tend to run along anticipated lines. Teams and managers like to talk about one game at a time. But any team with ambition plans for the bigger picture and takes certain chances with selection and takes calculated gambles.

Teams are starting to win the games they should be winning. The shock factor is being eliminated from the equation. You play correctly and take care of business and then all attention goes to the fixture that you know will make or break your championship. For the few years I was in Roscommon, trying to convince the squad that Leitrim was not a key rival was a tricky piece of psychology.

Perhaps in their father’s era it had been a true rivalry but now it was a ticket to the semi-final. And that is not to be disrespectful to Leitrim, it’s just that the record book points to the fact that Roscommon win these games – often overwhelmingly. So it went on Sunday.

And the pattern is being repeated. Rivalries are disappearing. Dublin-Meath is over – at least for now. Kerry and Cork is not a rivalry, at least for the present time. Mayo and Galway has never been more alive. But Tyrone and Armagh is nothing like the contest it was a decade ago. The only theatre still sustaining the tradition of the shock in the championship is Ulster. But even there, Tyrone and Donegal and Monaghan have come to dominate the silverware since Armagh’s golden era came to a close in 2006.

So the tension and drama of these provincial days is slowly ebbing away. And it is hard to see how it is going to re-establish itself. There were 8,061 people in Hyde Park on Sunday, a nice crowd but probably 4,000 less than would have turned up when the provincial championship games were the only show in town.

They are becoming diluted for sure. And it is only going one way. Therein lies one of the linchpins of the provincial championship. This has to be of significant concern not just to the provincial councils but also the custodians of the GAA.

In some ways, this is terrible to see. But if these rivalries have lost their electricity, whether real or imagined, then it is becoming increasingly clear the provincial championships are reaching the end of the line.