TV View: Having not seen players for seven months, panellists hadn’t a notion who to tip 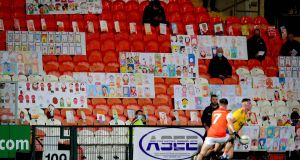 Self-portraits from more than 3,000 primary school children across Armagh in the stands during the Allianz Football League Division 2 game between Armagh and Roscommon on Saturday. Photograph: Ryan Byrne/Inpho

It might have struck you on Saturday listening to Colm “Gooch” Cooper and Kevin McStay trying to preview the game between Armagh and Roscommon that not enough sympathy is being given to our pundits this weather, despite all the new challenges they’re facing. Indeed, quite a bit of what they learnt in punditry school no longer applies.

For example: “Playing at home is a big boost for Armagh,” said Gooch. “I’m not so sure,” said McStay, “there’s nobody there.”

There were, though, 3,000 self-portraits of Armagh schoolchildren in the stands, which was exceptionally cute but still a little weird, especially when there was no reaction from them at all after Rian O’Neill opened the scoring for the home side.

Form-wise, our panellists hadn’t a notion who to tip. “It’s hard to know,” said Gooch, “we haven’t seen them for seven months.” And a lot can change in that time. Last he saw Armagh’s young Conor Turbitt, Gooch was mightily impressed, reckoning he wouldn’t look like a fish out of water come the business end of the Championship. But that was then. If Turbitt had lived off a diet of Netflix and tangy cheese Doritos since March, he mightn’t be the same man.

He was in fine shape, though, as were most of his GAA comrades over the weekend, proving, perhaps, that they were the ones who bought all those kettlebells in Aldi early in lockdown.

It was Roscommon – who, with “Win a home in London” emblazoned across their jersey, appeared to be encouraging the county to emigrate – who prevailed, as did their neighbours Mayo come Sunday, taking their game to a whole new level against Galway. Now we just have to hope the country doesn’t go up a couple of levels itself and put the kibosh on the intercounty season just as it got started.

Whatever happens, Laois would probably quite like Zach Tuohy to come home from Australia and help them out, them having been trounced by Westmeath on Saturday. Instead, though, the fella is busy preparing for next weekend’s Grand Final having helped Geelong Cats beat Brisbane Lions.

His performance in the game was handy enough, but it was his post-match display that earned him the MVP award when he had a chat with 7AFL’s Luke Darcy. What, Luke wondered, would the scenes be like back home in “Portaloosh”. And if his Ma and Da could live-stream the games. “Are they able to get them in real time?”

Zach looked only marginally more bemused than Arsène Wenger when he was Zoomed in to The Late Late Show to talk about his autobiography, only to be asked about Thierry Henry’s handball, Roy Keane and how brilliant the Irish supporters are. All that was missing, really, was a question about whether he enjoyed Foster and Allen singing A Bunch of Thyme on Top of the Pops.

If the interview was actually live, Arsène would have had tons of stuff to talk about after Premier League events on Saturday, what with Jordan Pickford attempting to kick Virgil van Dijk’s right leg in the direction of Jupiter, Jordan Henderson’s “winner” being disallowed because Sadio Mané’s armpit hair was offside, and Sergio Agüero being very fortunate not to have an assistant referee’s flag pole shoved where the sun don’t shine after pat-patting Sian Massey-Ellis like she was a Labrador pup.

No little controversy, then, BT’s Peter Crouch having had enough of this VAR/offside carry-on. “I DON’T WANT TO BE DISCUSSING ARMPITS,” he said, so they moved on instead to the van Dijk incident. How big a miss would he be if he was ruled out for a while? Huge. As Martin Keown said of one of his many talents, “he’s a power-horse in the air”.