Kildare sign off league campaign with another impressive win 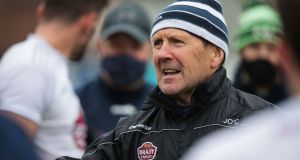 Kildare secured their second win since the resumption of games but it wasn’t enough to earn promotion to Division 1 as results elsewhere didn’t fall their way.

Still, to finish the league in third place on eight points is a good effort from Jack O’Connor’s team considering they lost three of their first four games and at one stage were staring at relegation.

A spell of four points in a row during the first half, two from Darragh Kirwan, pushed Kildare 0-6 to 0-3 ahead and it was a lead they held for the remainder of the game. Kildare led 0-8 to 0-5 at half time but Westmeath knew a win for them could open the possibility of promotion and they pushed hard early in the second half.

Killian Daly and John Heslin scored either side of Mick O’Grady’s second point of the game but Kildare’s towering midfield duo Kevin Feely and Aaron Masterson helped them get back on top again.

They scored three points in a row either side of the water break, two from the again excellent Jimmy Hyland, to move into a 0-12 to 0-7 lead.

With nothing left to lose, and with news of Clare getting back on level terms with Armagh filtering through, Westmeath began to push forward and two points from John Heslin and another from Ger Egan got them back to within two points with 10 minutes to go.

That, however, was as close as they got and as Armagh pulled away in Ennis to extinguish any remaining hopes of promotion, Kildare got back on top in Newbridge and finished the game by scoring four of the last five points to ensure they are in tip-top form heading into the Championship season.