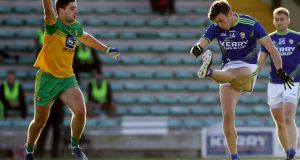 Kerry’s David Clifford gets his shot away despite the efforts of Donegal’s Brendan McCole during the league clash at Austin Stack Park. Photograph: Lorraine O’Sullivan/Inpho

If and when they have to deal with them, Dublin are going to find Kerry significantly more of a handful than they did in 2019.

Kerry closed out their 21st league title on Saturday without having to overly exert themselves in putting away a Donegal team that had come down the road without Michael Murphy, Ryan McHugh, Neil McGee or Patrick McBrearty.

A 14-point win over a scratch team proves nothing, obviously enough. But you can’t look at Kerry now and fail to see their improvement in style and substance since the Dubs outstayed them in the All-Ireland final replay 13 months ago.

Their defence is set in stone now, which is not a sentence you could have written about a Kerry team for the guts of a decade. Peter Crowley’s return to centre-back is the last jigsaw piece, giving freedom to Paul Murphy, Tom O’Sullivan and Gavin White to forage in attack when the mood takes them.

“We have a lot of young players, ten of them have come out of the minor titles over the last few years,” said Keane afterwards.

“So our age profile in the team is dropping, and you want to get as much experience into those players as you possibly can. And we brought in fellas who did well in the county championship who were riding a bit of a crest of a wave and some of those guys have taken it on from there and are doing well.”

The particulars of this one were sorted out in the 20 minutes after the first-half water break. The game up until then had been a knotty, wintry affair, full of slow build-up against heavily manned ramparts on either side. Donegal can play that kind of game blindfolded and so even in their weakened state it was no great shock to see them go to the water break 0-3 to 0-2 ahead.

That was as good as it got for the visitors though. Kerry rocketed out of the water break and sucked all mystery from the afternoon in the space of 10 minutes. Raiding corner-back O’Sullivan started insinuating himself into the Kerry attack and after playing a one-two with Clifford he picked a De Bruyne pass in behind the Donegal cover to put O’Shea in on goal. It was a pass that deserved a green flag and O’Shea duly obliged.

A minute later, O’Sullivan was put away himself, sent through by a lovely Tony Brosnan ball to leave him one-on-one with Shaun Patton. His attempt to emulate O’Shea wasn’t as successful though and he blazed his shot over, leaving Kerry 1-3 to 0-3 ahead.

Kerry were relentless now. White, the wing-back who has returned from the break in peak condition, blazed through for a goal of his own in more or less the next breath. Collecting near the sideline on the Donegal 45, White rode three tackles and pinged a low shot past Patton from 20 metres out. On a cold afternoon, it was a goal stolen from summer.

Donegal had no real way back after that. They might have had the stomach for a tight game if that’s how it had played out. But with Tyrone on the horizon and their main men sitting on their couches 400km away, a six-point margin was realistically more likely to lengthen than shorten from there on out.

And so it proved. Brosnan was in ruthless, economical form in the Kerry full-forward line, ticking along with scores without having to expend a lot of effort. He fisted a point when a goal was on after Clifford put him away on 25 minutes and tidied up another from a poor Patton kick-out immediately after. By half-time, Kerry were 2-9 to 0-8 ahead.

A couple of aspects of that total would have seriously pleased Keane. For one thing, Kerry compiled it while playing against the breeze. But just as pertinent was the fact that they put it together without leaning on Clifford.

The young magician only contributed a point in that first half – and it was an injury-time free. He was involved in plenty of link-up play but in general, Donegal corner-back Stephen McMenamin did well. Not for the first time, either.

The second half was an accounting exercise, in all truth. Kerry had the game won and showed very little interest in turning in a vulgar scoreline.

Brosnan continued his fine afternoon, nailing a point from play and another from a mark either side of the water break. Clifford started stretching his legs as well and tacked on four points from play, two of them laid on by Brosnan.

In this fettle, they’ll ensure the six-in-a-row is anything but a given..