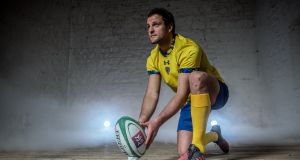 Michael Murphy was a teenager in 2005 when Tana Umaga, Conrad Smith and the late Jerry Collins visited Letterkenny RFC to pay homage to the original All Black captain Dave Gallaher.

“Once I heard it was rugby I was definitely interested,” said the Donegal captain about becoming the latest guinea pig for AIB-backed The Toughest Trade.

Considering Murphy’s size and mobility, there would have been genuine potential for his transition into rugby, 10 years ago, and not for this gimmicky, trading places television show – retired Wales winger Shane Williams recently kicked 0-3 for Glenswilly.

The 27-year-old is being parachuted into ASM Clermont Auvergne’s Top 14 campaign ahead of Joe Schmidt’s former club travelling to Ian Madigan’s Bordeaux-Bégles on January 29th.

“With the time of year it works out perfectly to give it a rattle, give it a go, enjoy the experience and learn a wee bit from it.”

Maybe if Murphy had taken a similar path as Gallaher in the 1870s or more recent times when young Gaelic footballers sampled life as Aussie Rules footballers – Geelong pursued him – he would be entering his prime as a highly-paid athlete.

“Definitely there were opportunities. I wouldn’t have hacked it. There were sometimes I’d say to myself, I would love to be out in a professional environment and that was probably my opportunity to go and do that. To live in Australia, I wouldn’t have been cut out for it, not a hope.

“I just would have missed home too much. I know myself. I’m quite honest, and at that time and still I just want to play for Donegal.”

O’Shea’s American football trial was non-contact and, while Maher staring down a fast bowler sounds daunting, a full training session with some of the biggest specimens in rugby brings a very real threat to Murphy’s physical and mental well being.

“Come ’ere, you could just as easily get injured at a training session back home. I won’t be going into it like that. I will be going into it to learn as much as possible and really challenge myself.”

Do you know how to tackle?

“Nah. A small bit. We would have done a bit in Australia during the Compromise Rules. I am sure it is a lot more technical than that tackle.

“That’s a bit of apprehension I have. It probably looks physical but I would say it is a hell of a lot more technical than it actually looks. That’s going to be one of the main challenges and in and around the ruck.

Will you have to tackle in a match scenario?

The stipulations of Murphy’s insurance cover, and whether it is feasible at all to allow an amateur take part in full-contact training with professional rugby players, may block this from happening.

“I think they have a game in the next few weeks so I imagine I will be doing what they are doing throughout the whole week. I’m sure there will be a bit of physicality involved. That’s part of the experience.”

Murphy, who has suffered one concussion playing club football, was asked about the spectre of head injuries in rugby, which sees the head injury assessment coming under constant scrutiny as the number of potentially concussive incidents that are assessed increases.

“It’s there for a reason. It’s a huge issue, a huge danger across all sports. I suppose the physical nature of rugby it is going to be creeping in a whole lot more what with the impacts and sustained impacts week in week out obviously it is bound to take its toll somewhere along the line.

“But it is such a tricky area how you manage it, how you tell a player not to play, how do you pull a player off the pitch when he thinks he is alright or may think he is alright. How do you put a protocol in place and get that protocol respected by players and management and officials. I don’t know.

“I suppose they are trying. Whether it is a token gesture I’m not sure.”