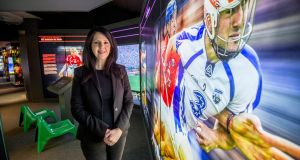 Niamh McCoy: “You can’t get a more authentic experience than coming here to the museum and going to a match.” Photograph: Brenda Fitzsimons 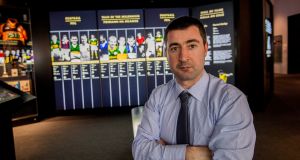 Mark Reynolds: “I’d say you’re looking at 15,000 items at the moment – everything from match programmes and letters.” Photograph: Brenda Fitzsimons

The GAA Museum is fronted by Paul Ferriter’s imposing statue of the association’s founder, Michael Cusack (1847-1906), who – as an educator and cultural activist – would have approved of his monument’s location.

Established 19 years ago, the museum emerged gradually. It is now included on the sight-seeing city bus tours, gained recognition as an accredited museum and developed its archive resources.

Mark Reynolds, who has been the archivist for the past 10 years, can chart a steady growth in the records and materials maintained by the museum.

“The museum was established in 1998 but the archive was only set up in 2007,” he says. “In between the museum was getting requests from people wanting to come in and research our documents.

He says Liam Mulvihill, former director general of the GAA, “took the decision that we were going to open up the records. We also took the decision in 2012 to rebrand as the ‘library and archive’ because we were picking up books and memorabilia and the collection had been growing since 2007.

“I’d say you’re looking at 15,000 items at the moment – everything from match programmes and letters.”

The cultural remit of the GAA, often more honoured in the breach than in the observance, has also benefited hugely from the development of the library and archive and the outreach programmes managed by Reynolds. These include research facilities, lectures, publications and, for the first time last year, a summer school.

“We had had lectures from people like Diarmuid Ferriter, Tim Pat Coogan and William Murphy, ” he says, “Leading on from that we decided to have a three-day summer school based on the book The GAA & Revolution in Ireland 1913-1923, looking at the GAA in one particular period.”

The summer school got off the ground relatively late in the day and will have a longer lead-in this year. Otherwise, Reynolds says the event held last July was a success and that soundings were taken from those in attendance about the theme for next summer, including “Sport and Politics in Ireland”.

“Feedback was very good. People who attended really liked it and the way they were able to ask questions and interact with the speakers. The over-riding feeling was that this should become an annual event, so it will take place again this year.” The dates are June 29th-July 1st.

“This year’s theme came from feedback,” he adds. “They said they’d like to hear more about other sports. The topic of sport and politics was popular, but they’d have liked to hear how rugby did during this period and soccer. This year we’ve just opened it up to sport and politics and we’re not confining to any period, so it will be from the 1880s up until the 2000s.”

Topics will include the collapse of the GAA in the 1890s (the Parnell Crisis); Irish sportsmen and the first World War; the Hillsborough tragedy as cultural trauma; Irish republican attitudes to sport since 1923; and sport and politicians. A parallel project was the online archive related to the 1913-23 book, to be found at (gaa.ie/centenary).

“We went down to the National Library and sourced match reports and tried to scan them, but it wouldn’t work. So we had to key in text, which took quite an amount of time, and then made a PDF out of it and created audio so that people could listen to it.”

The library and archive records are available to the public, although viewing is by appointment. During the busy period in and around the summer months, there are two to three people every day visiting – a significant number, given the restricted space for reading rooms.

“People are booking in on a regular basis. This year is already up on last year. Four or five years ago there was a bit of an explosion in people doing theses on the GAA and sport, but that’s died away a little at this stage.”

The recent initiative to publicise the release of the association’s administrative records, on the basis of a 30-year rule, as observed by Government (“we read and reread for anything personally sensitive,” Reynolds says, “in which case we don’t release”) is another example of the growing interest in opening up the GAA’s history to the public and academics alike.

Although the deliberations of the central council were up until a few years ago open to media, other central committees, such as management and any related to financial administration, have always met in private.

Reynolds is now working on a major project to digitise an archive of televised match broadcasts, a much-needed venture into the second wave of video. This is all the more important for the GAA, because it doesn’t hold the rights to film footage shot in the last century.

“We got a grant from the Broadcasting Authority of Ireland and have taken selected games from the RTÉ, TV3 and TG4 archives and are digitising the analogue formats, cataloguing players’ names, venues and so on. The plan is to store those 500 matches on a server here. We hope to have that completed this year.”

Even the television archive isn’t without its difficulties. RTÉ in its early years used videotapes more than once, with the result that some Gaelic games footage was simply wiped.

Reynolds gives the broadcaster a pass:“To be fair, that was a common enough practice. Nasa did the same!”

PANEL: THE VIEW FROM ON HIGH

The past tangles vividly with the future when GAA Museum director Niamh McCoy refers to the current TripAdvisor rankings for Dublin.

“We’re No 4 at the moment. We were No 1 and then they reconfigured their algorithm. But we’re the only five-star in the top 10. Our quantity of reviews isn’t as great as some of the others – Kilmainham would have about 10,000 and we have about 2,000. But we’re consistently given high ratings.”

McCoy, museum director for just over two years, oversees a range of activities, from working to increase visitor numbers to co-ordinating the Hall of Fame. The first task is well in hand: Numbers last year were about 153,000, ahead of projections, meaning they have doubled since the GAA’s 125th anniversary in 2009.

She says the Skyline tours along the roof of the stadium have been a major attraction and the success of last year’s 1916-themed initiative – picking out sights of interest from on high – has led to other similarly dedicated tours being considered.

Upcoming projects include an exhibition on the 22 All-Ireland medallists who have gone on to manage winning teams, and an arresting 360-degree virtual experience, which places you among players and officials on All-Ireland final day.

“I see it as an area for expansion: part of our culture, part of our past and history. But, most importantly, it’s what Irish people do.”