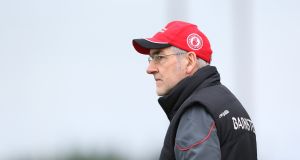 Tyrone manager Mickey Harte: “The pressure is to deliver the best of ourselves; that’s the only pressure I can entertain.” Photograph: Andrew Paton/Inpho/Presseye

Mickey Harte wants to set the record straight, not because he needs to but because he feels there is a prevailing “myth” about what certain managers are demanding from their players, a perception they are somehow asking the impossible.

“Some people would have us believe that players don’t enjoy what they are doing, or that it is a chore for them,” says Harte, now entering his 15th season as Tyrone manager and in part responding to the recent leak of a player code of conduct from within Dublin club St Brigid’s.

“Yes, there is a huge demand, but also the modern day Gaelic football athlete wants to do what they are doing. I want to set the record straight on that. I have not yet met anyone who does not enjoy playing for Tyrone, and I think there are very few county footballers who do not enjoy what they are doing.

“In fact, they set the standards for themselves. They are the most demanding people on their own time, their own commitment and they have to be admired for it.

Harte also believes that certain people are peddling this “myth”, and that the St Brigid’s code of conduct was taken both out of context and proportion. “I do believe that, and it is typical if you say something often enough, and with enough vigour, that people will start seeing it as a truth, but I don’t buy that.

“How does that [the St Brigid’s contract] tell us what the standard is across the country? This could be an exception to the rule, perhaps. And it might not be happening to everybody. That is the not standard issue that is happening in club and county teams. People expect to commit to each other; they are in this together and they must set certain standards. If they don’t want to live by those standards, they move off and do something else.

“But you know, this is a very extreme example and we can’t hold that up as a typical example of what goes on in the GAA world. Keep it in context, that is overboard and extreme in one fashion, accept it as such, but don’t believe that this is the way of the world now. It is not like that at all.”

Harte also suggests he has never laid down a code of conduct, other than that which has come from the players: “No, and I wouldn’t lay out rules, because it’s not for me to dictate how the rules should be. What it is for me is to facilitate the group to decide what they need to do. I have to talk to all of those players and ask them what do you think we need to be about here to deliver the best of ourselves, so we come to a consensus of what needs to be done.

“And if it’s a consensus and if people contribute to the ‘contract’ that they want to live by, then it’s their doing, therefore we should all live with. They won’t be putting in anything they feel they can’t adhere to, because they will say ‘we can’t do that’. So they will come up with something that is sensible and right for them and I think that will still prevail in many places, club and county.a

There is something else Harte wants to set the record straight on: despite the county board not yet agreeing an extension to his current contract, which expires at the end of this season, he feels under no more or less pressure, nor does he feel he has anything more or less to prove.