Michael Fennelly: ‘It’s hard to walk away, that buzz in Croke Park’ 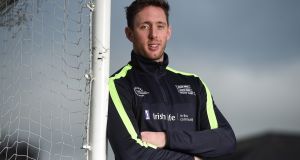 Kilkenny hurler Michael Fennelly at the GAA Healthy Clubs launch at Craobh Chiaráin GAA Club in Donnycarney, Dublin. “Hurling is such a large part of my life, over the last number of years, and I feel I have more to give.” Photograph: Cody Glenn/Sportsfile

The last thing Michael Fennelly wants to entertain is the prospect of never playing with Kilkenny again, although such was the abrupt nature of his Achilles’ tendon injury, there’s simply no denying it either.

“Of course, there is that fear, except I try not to think too much about that,” says Fennelly, nearly five months on from the injury sustained in the drawn All-Ireland semi-final against Waterford. He turns 32 next month, and the 2011 hurler of the year has already had his unfair share of injury, including a chronic back complaint from 2012.

“So I haven’t a clue, and that’s being honest. It’s very hard to put a time limit on the Achilles. It could be six months, seven months, eight months. I won’t know for sure until March or April.

“I’m trying to positive, week by week, and try to keep the small gains going,” he adds. “The back is still not great – even sleeping in different beds sets it off. And after the hurling phase, things won’t be too pretty, I don’t think. The physical work is still important, because that’s what activates the muscles, but playing at the level and intensity of Kilkenny is not good for it. I’m 31 now, and the years are not on my side either.”

“It’s about four months now, post-op. We’re just back from holidays, last Monday. And over Christmas you’d be chilled out enough with the rehab. But walking a lot better now, and hopefully pushing on to running next. But it’s definitely on a week-by-week basis. I need to get more muscle into the calf.”

Because the Achilles was ruptured completely, the surgery involved taking a piece of existing tendon, from the foot, and using that as part of the reconstruction.

“At least it was from the same area, and used my own natural tendon. Everything is okay at this stage, but it’s still at the healing phase, and I will lose a lot of mobility.

“But when you stop you stop, and hurling is such a large part of my life, over the last number of years, and I feel I have more to give. It’s very hard to walk away, that buzz in Croke Park. So it’s the love for the game, love for Kilkenny, and I’d love one more year in that jersey.”