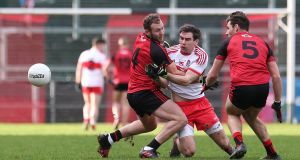 The roar from the partisan 1,500 crowd at the end of this Dr McKenna Cup game encounter was not just for a home win in a tight contest, it represented Down’s first competitive inter-county win since April 2015’s national league victory over Laois.

As has been the pattern in the early rounds of the Dr McKenna Cup, both sides offered up another open, enjoyable game of football. Down edged it, and deservedly so. Alan Davidson, in only his second game for the county, top scored with nine points and was his side’s match winner. Manager Eamonn Burns paid tribute to the Bredagh ace.

“Alan has played well all year with his club that won the county championship at Intermediate level,” said Burns. “He gives you an extra dimension up front and he’s scoring at the minute which is also a bonus.”

Burns, though he may not have shown it, will also have been delighted at removing that monkey off Down’s back having finally secured their first meaningful win in 20 months.

“You like to win obviously. Last year was a very tough year for us. We set our stall out this year to bring in a few fresh faces and that’s helped the whole thing.

“The opposition made the difference today,” he continued, “ and I think Derry put on a couple of very experienced players in the second half. We had a quite a young and inexperienced team out the last two weekends so we were happy to get a win today.”

Down ran in at Pairc Esler a point to the good at 0-9 to 0-8 up at the half-time break, but that stat only tells half the story. A scorching start from the home side, led by the twin jagged attack of Barry O’Hagan and Davidson, stretched Down’s early lead to 0-6 to 0-1 after just eleven one-sided minutes.

Indeed Clonduff clubman O’Hagan in particular burst out of the blocks swinging over two immaculate scores with just 50 seconds gone on the clock.

O’Hagan blazed the trail, his full forward partner Davidson quickly manoeuvred out of that slip stream and finished the first half with six points, each of them better than the previous. The Bredagh sharpshooter has been the brightest gem unearthed by Burns this season having notched up 1-4 from play in his debut last week for the Mourne men.

Opponents Derry repeated their sluggish opening to last week’s win over Armagh but heavily outscored their hosts in the second quarter to peg their deficit back to a point at half-time, with Ryan Bell and free-taker Benny Heron both in fine form and finding most of their scores.

The introduction of the experienced Enda Lynn at the interval, who scored within 30 seconds, and Mark Lynch, who would hit two points, enabled Derry to edge ahead early in the second half. But this contest was finely balanced throughout the second 35 minutes as both experimental outfits wrestled for the win.

Derry played their part. Benny Heron was again ubiquitous for the Oakleafers, James Kielt, too, pointing soon after his introduction. But while Damian Barton’s side strung several decent passages of play together, this was Down’s day.

Joe Murphy, Jonathan Flynn and substitute Caolan Mooney all pointed for Down but it was that man Davidson that again was able to chisel out scores just when his side needed them most, including his ninth point of the game, and Down’s winner in injury time.

With two wins from two now in the competition, Burns’ side now travel to near neighbours Armagh on Wednesday night with a semi-final berth well with their reach.

Cavan built on their good win over Tyrone in the opening round of the Dr McKenna Cup with a convincing win over Donegal in MacCumhaill Park, Ballybofey.

A goal from Rory Dunne midway through the second half put the Breffni men in control against the Donegal side, which was represented by the U-21s once more.

The sides were level at the interval after a pretty even opening half. Cavan started well kicking the first three points, two of them Seanie Johnston frees, but an Ethan O’Donnell goal had Donegal quickly back on terms.

Donegal edged ahead just before the break through Michael Carroll, but Niall McDermott responded for Cavan to leave it 0-5 to 1-2 at the break.

Cavan again hit the first three points of the second half and even though Donegal got back within a point, Dunne’s goal put Cavan ahead by 1-10 to 1-5 after which they tightened the screw.

Paul O’Connor then added a late second goal, with Donegal only managing one more point as the game petereed out to its by now inevitable conclusion.

Cavan are now favourites to win the group and qualify for the semi-final. Their final game is at home to UUJ on Wednesday night in Breffni Park, while Donegal’s young guns must travel to play Tyrone with nothing to play for.

Monaghan’s footballers cemented their place at the top of Section B of the Dr McKenna Cup with a comfortable 17-point win over Antrim at Glenavy.

A goal from Colin Walshe on 24 minutes helped Monaghan to a 1-9 to 0-3 half-time lead with Shane Carey’s second half penalty heaping more misery on Antrim.

Michael Bannigan opened the scoring for the visitors in the second minute but this was as good as it would get. Walshe scythed through the Antrim defence to fire past Chris Kerr and the visitors added a further five points before the break.

Antrim launched a mini revival just after the restart, scoring the opening three points of the second half but normal service resumed when goalscorer Walshe floated over a point from play.

When Ronan Hamill dragged down Carey in the square, the same player stepped up to convert the penalty - stretching the lead to 16 points. Monaghan’s Niall McKeown then saw red for a second bookable offence but the Farney men already had the game wrapped up.

Armagh kept their hopes of reaching the semi-finals of the Dr McKenna Cup alive by overpowering a weakened Queen’s side at the Athletic Grounds.

The Orchard county, after struggling to find their scoring rhythm in the first-half, launched a second-half blitz that was highlighted by goals from Ethan Rafferty and Anthony Duffy which secured a 16-point victory that sends them into Wednesday night’s third round tie against Down in good heart.

Aidan Forker, Oisin MacIomhair, Ben Crealey and Rory Grugan stamped their imprint on the proceedings for Armagh while Down ace Martin Clarke did much to stoke Queen’s resilience by landing four points.

Dr McKenna Cup holders Tyrone are clinging on to semi-final qualification hopes following a convincing win over UU at Carrickmore.

A solid second half saw them step up the tempo and stamp their authority over the visiting students, who bowed out of the competition following the defeat.

Tyrone took some time to settle, and led by just a point by the time they struck for a 16th minute goal, Peter Harte passing across the goal for Niall McKenna to palm home at the far post.

Down target man Niall Madine was a constant threat for UU, and he responded instantly with a point, with Daire Gallagher and Ronan McAlinden also on target for the students.

Scores from Johnny Munroe, Peter Harte and Ronan McHugh kept the Red Hand noses in front, but Madine punched home a goal from Barry Grant’s delivery on 34 minutes, and at the break, the home side held a slender 1-8 to 1-6 lead.

But Mickey Harte’s men stepped up the intensity and conceded just one point in the second half, while piling on 1-9 of their own.

Newcomer McHugh smashed home a brilliant goal after a Colm Cavanagh assist in the 39th minute, and the rest was a formality against the tiring students.

Fermanagh provided a hard working performance to dispatch a battling St Marys University side at Brewster Park on Sunday.

The hosts raced into a 1-2 to 0-0 lead with the goal arriving from captain Eoin Donnelly. St Marys though hit back with five points themselves thanks to the excellent Darragh Kavanagh and Pearse Og McCrickard.

Fermanagh finished the first half the better though and had points from Eoin McManus, Ciaran Corrigan and Tommy McCaffrey to lead at the break, 1-7 to 0-8.

They then moved further into the lead in the second half thanks to Eoin McManus and Paul McCusker - but Crossmaglen starlet Oisin O’Neill landed two fine strikes for the students and a further point from Lavey’s Niall Toner made it a two point game with ten minutes left.

However Daryl Keenan marked a first return in the Erne colours after missing a number of seasons with an excellent goal and more points from Tomas Corrigan, Michael Jones and Paul McCusker secured Pete McGrath’s side with an opening win for the 2017 season.