New GPA CEO Dermot Early not to be underestimated 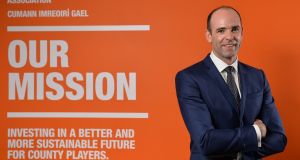 Dermot Earley: chosen as the new CEO of the Gaelic Players Association. “There is an appetite for change and we have been hearing that for a long time, certainly on the football side.” Photograph: Seb Daly/Sportsfile

The new face at the top of the GPA is an old face and a familiar face. So much so that you would be forgiven for presuming that Dermot Earley has been anointed as Dessie Farrell’s successor on the basis that he will be every bit the safe pair of hands in the CEO’s role that he was in his playing days for Kildare.

Yet for all that the 38-year-old speaks softly, he showed during his unveiling in Santry yesterday that he has no qualms about carrying a big stick as well.

Earley can come across sometimes as every inch the diligent company man but he wouldn’t have survived in either of his career roles to date – intercounty midfielder and Defence Forces officer commanding – without the steel to back it up.

And though relations are currently good with the GAA hierarchy and the GPA have no wish to see them sour anytime soon, you don’t want to be too cosy either. Earley agrees that there should always be a little edge between them.

“It is important,” he said. “Currently we have a very respectful relationship but I think the agreement we had in 2016 . . . talks broke down [in the middle of the process]. We were quite strong, we were quite adamant in certain areas that we wanted and we were both happy at the end of the day that we received what we were looking for. The details of that are in that agreement.

“We have a respectful relationship but we don’t always agree and you do need to maintain an edginess at all times. I don’t intend to change that direction.”

Earley has been a member of the GPA since it was founded in 1999 and for the past three years he’s been the association’s president and Ard Comhairle delegate. The new job means he will be taking an indefinite leave of absence from the Defence Forces and, in all likelihood, won’t be going back.

Farrell did 13 years in the job before announcing he was moving on last September. Earley wouldn’t put a figure on how long he intends doing it for but he’s in it for the long haul.

The job is as big as he wants to make it, with limitless potential in size and direction. The tragicomic foostering that means the GPA can’t bring a motion to Congress in 2017 because first they have to bring a motion about being allowed to bring a motion is an obvious irritant but they will get on with the issues at hand all the same.

“The most pressing one is most certainly the championship structures,” he said.

“There is an appetite for change and we have been hearing that for a long time, certainly on the football side. We did present a proposal [in 2016] but it did not make it to the floor of Congress last year because it did not have a B tier and the number of games were increased in the proposal. But the irony is that the GAA’s proposal has an increased number of games as well. We will have to watch that space very clearly.

“I would have hoped that we could bring a motion to Congress in 2017 but to be allowed to bring that motion it has to go to the floor of Congress, so we won’t be able to bring a motion ourselves until 2018.

“But we will watch this space very carefully and see what the reaction is and if that proposal will actually get passed. How the GPA will vote on that is on the basis of what our members want and I will engage with them on that before Congress.”

Earley was strong on plenty of subjects. They will continue fund-raising in the USA even though they are keenly aware it doesn’t make them popular with clubs on either side of the Atlantic.

The Super 11s hurling game will go again before the end of the year and might even be extended to four teams rather than two in the future. Even the old third rail taboo of pay-for-play wasn’t dismissed out of hand when Earley was asked about it.

“It’s all about whether or not the players are calling for that,” he said. “When I go out to talk to them after taking over, if I come away from those discussions and I reflect that that is one of the pressing issues, then it does become something that is on the agenda. But at the moment, it’s not. And I’m pretty close to the players to know that it’s not top of the agenda at all.”

All in all, Earley came across as someone not to be underestimated. It would be foolish of the GAA to take him for granted.