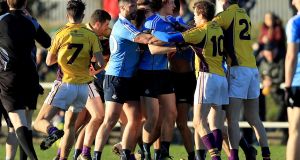 Tempers flare between Wexford and Dublin at Enniscorthy. Photograph: Inpho

Paul Clarke’s experimental Dublin literally kept the show on the show on the road with a hard-fought win against an also trialling Wexford selection in St Patrick’s Park, Enniscorthy.

The win, combined with DCU’s defeat of UCD, puts the winners in the Bórd na Móna O’Byrne Cup semi-finals where they will play Kildare and the panel, under Clarke’s guidance, will continue to compete in the competition even though Jim Gavin’s All-Ireland winning panel has returned from holiday.

After a spell in the Caribbean, the first-team players can probably cope with the deprivation.

Dublin more or less led from gun to tape in this once they took the lead in the seventh minute and but for brief interludes in each half, firstly  in the 29th minute when goalkeeper Evan Comerford misjudged Joe Wadding’s shot, admittedly into a swirling wind, that he was ushering wide as it somehow dipped into the net.

That levelled the match at 0-7 to 1-4 but only for seconds before Dublin showed great urgency from the kickout to run the ball into attack and set up a chance for Conor McHugh whose precise shot to net restored the lead.

Dublin’s Gary Sweeney got the line for striking and Wexford’s John Turbit was caught kicking out at Ciarán Reddin during a tangle over a Dublin free.

Wexford brought on Ben Brosnan for the second half and he harnessed the wind well to kick four frees, the second of which tied the scores at 1-8 a piece in the 54th minute.

Dublin held steady and Paul Hudson’s shooting – 0-8 including two from play – kept them in business and provided the four last points that acted as an effective riposte. He earned the commendation of acting manager, Clarke, who was pleased with the improvement from last week’s defeat by UCD.

“Soft pitch, strong breeze, a very hardy welcome but I think the guys adapted well. We wanted to get off to a better start than what happened on Wednesday night and we showed a little bit more composure.

“Paul got on the scoreboard early, we discussed it, he wins his own ball very well and contributes on the scoreboard in many ways but I thought right through the whole team there was a little bit more leadership in each line.”

He confirmed that the group would continue to represent Dublin in the competition.

“The objective as I said before was to get as many players as possible through into national league contention and championship contention and that stays good. You got to stay loyal to them.”

His opposite number Séamus McEnaney expressed himself pleased with the findings of the campaign, as he gets ready to announce the league panel for his first season with Wexford.

He said they had set out to put it up to Dublin physically but haddn’t seen his player’s red-card offence.

“Yeah. It’s a physical game we’re playing and if there’s one thing that disappoints me about the GAA over the last number of years is that we’re losing the physicality. It’s one part of my game I don’t intend losing for whoever I’m managing.

“I would say that what John Turbit did, whatever it was, it was foolish if he did strike but I don’t mind taking yellow cards. There’d be loads of days that I’d be disappointed not taking six or seven of them to tell you the honest truth. It’s a physical game and I think it’s a matter of players when to be physical and when not to be.”

1 Seán O’Brien: Anger over my parents’ break-up has never left me
2 Six Nations - Ireland v Italy: Kick-off time, TV details, team news, standings and more
3 Ireland out to make a bold statement of intent against callow Italian side
4 Ireland entitled to feel at home with sparing use of residency rule
5 Matt Williams: Ireland’s strategy of ‘heads up attack’ will not work without strategic thinking
Real news has value SUBSCRIBE