Mayo's remorseless climb may have peaked for another year 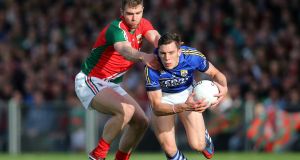 In the space of a couple of weeks and on the back of Roscommon getting walloped in a replay the race for the GAA All-Ireland football championship has become a matter for the “Big Four” rather than the previously anointed “Big Three”.

This amendment of the contenders’ list depends on a particular view of Mayo’s demolition job on the bank holiday: that after weeks labouring away off Broadway perfecting their lines they are now ready for the big stage again.

It’s not that this is implausible. They have been a remarkable team for the past seven seasons. No group of players has been as undeterred by serial failure at the very top of the game and as relentless about getting back to where they were the previous year and renewing the effort.

In the case of Sisyphus it was a punishment. For Mayo, it’s an annual quest.

The wonder extends to the whole county. Every year instead of becoming disheartened by another click on the 1951-ometer, they come back convinced they are closer to and not farther away from the horizon.

Like a boxer who keeps coming despite constant punishment, Mayo have the ability to unnerve their opponents and project the possibility: this might be the day.

When generally well-matched teams meet, actually come together face to face, the value bet is that they will be evenly matched – whatever it might have appeared to be two months ago. Dublin found this out against both Kerry and Mayo last year. Invincible in spring and early summer, as soon as August and September arrived nothing appeared that straightforward.

The counties have played in championship seven times since Mayo last won and the best result in the meantime has been the draw in 2014. Outcome is the ultimate filter. The two matches in 2014 were beset by a sequence of misfortune on Mayo’s part.

Admittedly inability to protect a lead in the closing minutes isn’t misfortune; it’s carelessness. In the replay however, refereeing decisions played against them and for good measure, two of their best players before half-time ran straight into each other – head first.

The main emphases in considering the match have been on potential weaknesses on either side. Mayo’s travails on Kieran Donaghy have been extensively revisited whereas Kerry’s hospitable central defence has been in the spotlight, particularly as Mayo’s running game went up a notch against Roscommon in the replay.

Donaghy’s career is almost measured out by Mayo: his explosive first year in 2006 was capped by 1-2 in the final; the semi-final five years later was part of the process of reconsidering his role to the point of obsolescence, which is where it was in 2014 when Eamonn Fitzmaurice threw him in like an amulet with 10 minutes to go and the result ebbing away.

Two and a half matches later he had another All-Ireland medal and a third All Star despite having felt his career was over when he hadn’t been brought on against Galway in that year’s quarter-final.

There has been speculation as to how Mayo cope with him. Ger Cafferkey had a hard time in 2014 but it’s sometimes forgotten that in 2011 Donaghy did not cause tremors in the Mayo defence. As he recalled later, an exasperated Jack O’Connor reminded him of this in a training ground exchange: “Jack said there were five balls kicked in between yourself and Cafferkey and you won f*** all of them!”

The problem for Mayo may not be the direct aerial assault for Donaghy’s quick feet and ability to bring Paul Geaney and James O’Donoghue into the game.

Kerry’s fallibility when being run at has been demonstrated in the past two matches with a docile Galway still able to blast gaps that other teams would have exploited and in the Munster final, Cork’s main joy was getting Ian Maguire on the move from deep.

This is Mayo’s game and regardless of Roscommon’s disorientation, the movement and combination was fast and impressive. Kerry provide more physical resistance in the middle third and although David Moran and Anthony Maher aren’t the paciest centrefield pairing, they provide serious targets for Brian Kelly’s restarts.

The loss of Donncha Walsh to injury addresses this to some extent with the loss of phenomenal work rate compensated by Stephen O’Brien’s pace.

The speculation as to where Lee Keegan might play on his return from injury has encompassed his marking – or screening – Donaghy and deploying him in the forwards, presumably to allow Stephen Rochford to crew up with seven defenders but there is an argument that Keegan is primarily a go-to man marker, leaving the question who does he pick up – of the variety of options in Kerry’s more penetrative attack.

Another aspect of Mayo’s quarter-final display that is not really open to interpretation is the clinical finishing of the opening quarter and the assembly of a six-points to nil lead from neither Roscommon nor the contest recovered. Andy Moran and Cillian O’Connor are around long enough to take chances regardless of who they’re playing.

Aidan O’Shea’s form has gathered momentum and the materials are there for Mayo to impact on a team that has never been fluent in semi-finals – undergoing panicky phases against Dublin, twice, Mayo and Tyrone in the past four years.

This is unsurprising for a team that gets tested so little en route since the decline of Cork.