When Mayo held the keys to the Kingdom 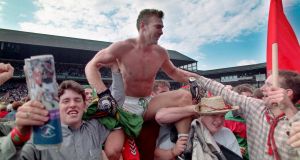 It was a different world: before the qualifiers restructured the championship and before the calendar year redefined the season. Yet the 1996 All-Ireland semi-final remains the only time in more than 50 years that Kerry have lost in the championship to a Connacht county.

It provided Mayo with a passage to the All-Ireland final in which they came closest to bridging the gap to 1951 – they were six points up in both the draw and replay against Meath – and served notice that the western province was about to become a regular championship contender.

Within two years Galway would take the Sam Maguire across the Shannon and add a further title in 2001. Mayo would reach nine finals – including two replays – without getting over the line.

This Sunday in Croke Park Mayo take on Kerry once more in the semi-finals and for the seventh time in the championship since 1996. Although the drawn match of three years ago remains the best that have done since, no-one in Kerry is likely to be feeling particularly complacent.

“Mayo are a team that are learning from their experiences all the time,” says Killian Burns, who lined out for Kerry in that semi-final 21 years ago. “They have taken Dublin right to the edge in a way Kerry haven’t so far managed in the championship.”

Burns was one of an upcoming generation of players, who won the Munster championship for the first time in five years in 1996. It was the first season of Páidí Ó Sé’s management and he had started to rebuild the team.

“We were a mix of under-21s and older lads who had had no real success for a long time,” says Burns. “We were very happy to beat Cork and the younger players who’d had Páidí at under-21 were down in Ventry the next day celebrating. I remember there was a photographer from The Kerryman there taking photos.

“The one used on the front of the sports supplement showed Páidí and a couple of players but behind them, stuck in a corner, there I am with a pint. The photo wasn’t used in a critical context, just a picture of the celebrations but Jack O’Shea had a column at the time in the Sunday Times and he made a comment about the picture, suggesting we were partying too hard and we should be concentrating on Mayo.

“He was looking in from outside of Kerry but he was right really. We were young and Páidí was less measured as a manager and still only around 40. He was the age I am now and I like a couple of pints with my old buddies. I mean he was probably still sore about being dropped as a player! So this was big for him that Kerry were back up there and we just didn’t really think of Mayo.”

Mayo had their own reasons to celebrate. Within the previous 12 months they had gone from losing a provincial final and getting relegated to Division Three to bouncing back in the league, reaching the 1996 semi-finals, and regaining the Connacht title.

Like Kerry they were under new management. John Maughan was a former county player who had his career ended by injury. Still in his mid-thirties he had a striking distinction: he had already beaten Kerry in championship.

As manager of Clare he had taken the county to a first Munster title in 75 years, beating Kerry in the 1992 final.

“There were a lot of positives to John,” says Anthony Finnerty, who played in the 1996 semi-final and was a veteran of John O’Mahony’s 1989 side that had contested Mayo’s first All-Ireland final in 38 years. He knew Maughan from their playing days and had been persuaded to come back.

“He was a good trainer, who worked teams hard. He had Clare very, very competitive and wining Munster so of course that impressed us. We wouldn’t have had any fear of that Kerry team.

“We’d played them in a challenge in Limerick and knew they weren’t like the team of the 1970s and ’80s.

“Beating them was still a big thing but more because we were back in an All-Ireland final. A few of us had been there in ’89 and we said to the younger fellas, ‘this is a big deal – getting to the final’. To an extent we were ticking a box, winning a semi-final but it was still a very significant win.”

Mayo controlled most of the match and won by a comfortable six points. Burns had been a student in UCG since 1993 and was familiar with footballers in the west.

“It was weird. I ended up marking Maurice Sheridan, who I knew well and marked in Sigerson training. There were good players there but it wasn’t as if I was nervous about an uprising of Connacht football.”

The following year Kerry got their revenge in the 1997 All-Ireland final.

“We were in a completely different state of mind,” says Burns. “I wouldn’t say we felt we had been caught on the hop because Mayo were a good team and better than us but we certainly said we were definitely determined not to let it happen again.”

Ray Silke became the first player from Connacht to raise the Sam Maguire in 32 years when he captained Galway in 1998. He says that his team were undoubtedly influenced by Mayo.

“It wasn’t so much that they had beaten Kerry but they got to two All-Ireland finals and should have won in 1996 – the ticker tape was in sight! It made us aware that our position in football wasn’t that far away. Mayo could have won an All-Ireland and we’d beaten them the previous year so when we beat them again in ‘98 we knew we had a shot.”

Twenty-one years later the road winds onwards for Mayo. Anthony Finnerty hopes that the current team can take a signpost from the past.

“I think their confidence is improved with the win the last day and maybe they can look back at ’96 and say, ‘we have beaten them!’”