GAA Statistics: Austin Gleeson, the superhero who needs to be more 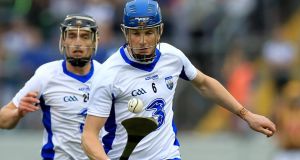 Waterford’s Austin Gleeson, at 22, is his county’s talisman. Photograph: Inpho

Two months ago when Cork beat Waterford in the Munster semi-final, the 2016 Hurler and Young Hurler of the Year Austin Gleeson, was taken off with 10 minutes of play remaining.

The Rebel contingent in Semple Stadium celebrated it like a 24th point. The two teams meet again in Sunday’s All-Ireland semi-final, but is the 22-year-old a better or worse player for Derek McGrath’s bold decision?

In his 17 senior championship matches, playing across the half back and half forward lines, he has scored a remarkable 2-52. And 2-44 of that has been from play. Already this year he has 0-16, with just the one trademark long distance free, in four games.

So he has registered the same 0-4 per game average from the 2016 championship.

Waterford are looking to push on and reach a first final since 2008, and win a first title since 1959. The same year, before this summer, that they had last beaten Kilkenny in championship hurling.

And despite the heroic blocks, big hits, the majestic fielding (although he has only caught one contested ball this summer), the highlight reels of scores and flicks from all angles; there does remain question marks over the youngster’s decision making. Still a youngster yes, but still his team's talisman.

Some of his hurling in the drawn and replayed semi-finals against Kilkenny was gargantuan, but he hit four wides in the last 10 minutes of a drawn game the Deise left behind. And struck seven wides between the two encounters.

So far in the 2017 championship Austin Gleeson has missed 17 shots, and scored 0-16. Taking away his two frees, one of which he scored and the other which he missed, and the seven sideline cuts from which he went for the posts; he has nailed 0-15 and missed nine shots.

From play that is a 63 per cent conversion rate.

In a sign of Waterford’s attitude to the league, Gleeson started just four of Waterford’s six league games, and started and finished only two of them.

But he still chipped in with 0-6 in 276 minutes (which is less than four full games). The focus has been all about championship this year for Waterford.

And so, he came into the Munster semi-final without playing a competitive second in 56 days. And without completing 70 minutes in 78 days.

In that semi-final defeat to Cork his first touch came after 10 minutes; he slid on one knee over the ball, flicked it up and pointed as he rose back up on the turn. It was as beautiful a moment as you’ll see in any sporting arena.

In that game he had only 11 possessions. Including his sideline cuts (three of them). He was rusty. He had a much improved 21 possessions (again including set-pieces) in the Offaly hammering, 27 in the extra-time win over Kilkenny, and 15 last time out against Wexford.

He is a once in a generation type player. A superhero, a Steven Gerrard of the hurling world.

He menaces on the peripheries (this year he’s been stationed in a floating role beneath his half forward line), then flashes in and out of the game like a thunderstorm.

Don’t look away, because you’re certain to miss something that’s either audacious, fearless, inspirational, or all of those at the same time.

He particularly comes to life in the middle third (time period) of the game; against Cork, Kilkenny and Waterford, eight of his 10 scores were between the 25th and 50th minute.

At what expense do those two, or three attempts too many come at?

But as the summer has gone on he has become more involved in the constant process, and tightened up on the sometimes reckless shooting. He needs to do so even more though.

In extra time against Kilkenny he cut across the middle of the park and wound up, yet instead of going for the big score and fist pump he played a genius ball through to Jamie Barron. Goal, and game over. That’s decision-making.

In his column in this paper last month former Kilkenny star Jackie Tyrrell said Gleeson must work “on his option-taking. And if it hasn’t improved, if it’s the same old story again, then maybe Derek McGrath has to take him off early in a game to teach him a lesson.

“If he becomes the ultimate team player, Waterford are massive contenders,” he added.

We’ll still be talking about Austin Gleeson’s exploits for years to come, and how he did the impossible. But at what expense do those two, or three attempts too many come at?

No doubt Waterford fans would rather an All-Ireland to eulogise than the legend on his own.

Another key challenge for Derek McGrath on Sunday will be to minimise the impact of Anthony Nash’s puckout.

In the Munster semi-final defeat Cork won 20 of their own 31 puck outs. Of those, 15 were cleanly won via a pinpoint delivery from Nash. Only one of those was to a man within his own 45 metre line.

Eight of his puckouts were taken within 11 seconds of the ball sailing over the bar (six of those resulted in scoring chances), while his restarts led directly to 13 attempts at scores (0-5 converted).

Push up and Nash can go long — against the Déise three went to the edge of the D — go zonal, or retreat in shape and numbers and he'll be swift and accurate in getting a Cork attack underway. Either way, they’ll need to apply their plan with conviction, unlike others have against the Rebels recently.

That decision, and getting the maximum from their superhero who needs to be more, could be the difference come Sunday.