GAA Statistics: Mayo’s miles on the clock can be a blessing and a curse 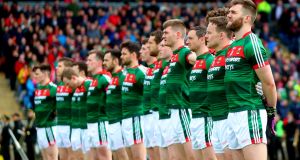 Mayo have the oldest team left in this year’s football championship. Of the four teams battling it out in the semi-finals – based on their quarter-final starting XVs – Mayo are the oldest, Kerry are next, while the average age of the Dublin and Tyrone teams is 26.

Eamonn Fitzmaurice’s team averages out at 27, while Mayo’s average is a year older at 28. Tyrone and Dublin had just the two players in their 30s, Kerry had three and Mayo had six.

Take out their 33 year-old goalkeeper David Clarke and Mayo’s outfield average still holds at 28. The team that overcame Roscommon in that replayed quarter-final bore only one outfield change to last year’s All-Ireland final replay defeat - talisman Lee Keegan out and Chris Barrett in - and at 27 the Westport defender doesn’t sway the average either.

The average number of championship seasons served by the Mayo starting 15 in their 22-point replay win over Roscommon is eight. Kerry’s average from their eight-point win over Galway is just short of six seasons.

Within that however, those 15 Mayo players have a combined 593 championship appearances between them. The Kerry players’ total is 357. So the Mayo team which is likely to take to the field on Sunday has an average age of 28, and has played an average of 40 championship matches over eight seasons.

Andy Moran, their most senior player, made his championship debut in 2004. Since then Mayo have won eight Connacht titles, played in 10 All-Ireland semi-finals and six All-Ireland finals. Nine of their last 14 matches in Croke Park have been decided by one point or less.

So far this year they’ve played seven games and been to extra-time twice, in comparison to Kerry’s three games - and they have an average winning margin of eight points from those three.

Miles on the clock indeed. Not to begin to say Mayo are burnt out - experience is key and the want is as great as ever - but how do Kerry try to expose any possible flaw?

As big, athletic and physical as Kerry are in the middle third, they need to transfer the ball through, and out of, those areas sharply. Since James Horan’s reign Mayo have built their teams around having a platform in that sector. They push up and squeeze the life out of opposition teams, then overrun them.

So now more than ever, Kerry need to stretch the O’Shea brothers and co, and get the ball moving quickly out of the tackle area.

The common theme has been the speed and accuracy of delivery

In doing so they will be feeding their inside forwards, who will trouble any team, especially Mayo. Kerry forwards love championship matches against Mayo. In the qualifier era the counties have met on six occasions in the championship; Kerry have bagged a combined 12-102 in those games – an average of 2-17 per match.

One man in particular has accumulated 1-4 of that, all from play, in the three starts he had in those games. He was the star of the show in the 2006 All-Ireland final, and turned things on their head in the 2014 semi-final. On his showing against Galway last time out, Kieran Donaghy is back in tip top form, but Kerry’s strength is that they have more than that.

Following the win over Galway, Fitzmaurice was asked about Donaghy’s impact under the high ball, in an otherwise laboured team performance.

“We did have great joy off it and it worked well when we used it,” he explained. “Kieran himself played very well but it’s good to have a mix as well.”

In Donaghy, James O’Donoghue and Paul Geaney, Kerry have a big man – the ultimate big man – a left footer to play off him, and a right footer to go on his own inside or loop around the others.

Their scores in the last two games have had various sources, some have been long balls, others running moves with soft transitions through the hands, or via turnovers. But the common theme has been the speed and accuracy of delivery.

At times Kerry can tie themselves in knots with possession, it looks sloppy and is easy to defend against. Yet at times they are devastating.

With a move being considered an attack once the ball passes into the opposition 45’; against Galway and Cork in the Munster final, Kerry averaged just three phases per attack in which they scored.

For 31 of their 43 scores there were just two passes involved in the attack before the score was kicked (or fisted).

For their attacks which led to scores against Galway, Kerry players handpassed the ball 38 times and kicked it 15 times. They went high and long to Donaghy on five occasions – with a goal, a point and an assist accruing off the star’s high fielding.

They let it in to him three times against Cork (against Clare, Donaghy featured only as a substitute late on at midfield), Donaghy assisted a goal with a palm down and lost possession with the other two. So far this summer scores have arrived directly off four of the eight high balls that have gone into him at fullforward.

So there’s obviously that option. But whatever way Kerry transition it, as long as it’s quick, they’ll be feeding the beast that is their inside line. Playing to their own strengths, as well as testing just how much gas is left in the Mayo engine that keeps on giving.

The qualifiers were introduced in 2001, and since then seven teams have won the All-Ireland having played more than seven games. The last was Cork in 2010 who also did so with two stints of extra time under their belt.

If Mayo are to do it this year no doubt they’ll do it the hard way.