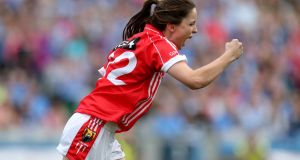 Eimear Scally produced a massive second-half display as champions Cork edged through against Monaghan in a nervy All-Ireland Ladies’ SFC qualifier in Tullamore.

Scally landed five second-half points as Cork survived a real scare to book a quarter-final clash with Connacht champions Galway on August 19th, as All Star Orla Finn also chipped in with a five-point haul before being called ashore.

The by-product of this Cork win, their first of the championship summer after defeats to Kerry and Waterford in Munster, is relegation to the intermediate ranks for Leinster counties Laois and Kildare.

Cork would have been dragged into a three-way relegation playoff had they lost but instead, Ephie Fitzgerald’s charges are looking at a place in the last eight.

Ciara’s twin sister Aoife created the opening with a brilliant run from a deep position, before the impish corner forward cracked a shot off the underside of the bar.

TV replays showed that the ball had indeed crossed the line – and Monaghan were boosted with time running out.

But Scally would claim the game’s final three points to put Cork through – a free levelling matters before she clipped over two from play.

Monaghan were turned over for the lead score, with Aoife McAnespie coughing up possession, and sub Niamh Cotter put Scally in the clear for the point.

In the 61st minute, Scally was on target again to put Cork two ahead, before the champions lost Jess O’Shea to a yellow card.

There was still time for Cora Courtney to trouble Cork but, in need of a goal to clinch a dramatic win, her free flew over the bar with the last kick of the game.

At the end of a low-scoring first half between these old rivals, the sides were deadlocked at 0-4 apiece.

Almost 10 minutes had elapsed before the first score of the game was registered, returning Cork captain Ciara O’Sullivan on target after the Leesiders had kicked three early wides, and dropped another effort short.

But they wouldn’t score again for another 11 minutes and in that time, Monaghan opened up a 0-3 to 0-1 lead, despite Cork dragging plenty of bodies behind the ball.

Rosemary Courtney’s point levelled matters in the 14th minute before efforts from Caoimhe Mohan and Ellen McCarron (free) opened up a two-point lead for the Farney girls.

Finn’s free for Cork reduced the deficit but Monaghan were 0-4 to 0-2 clear when McCarron’s precise ball inside picked out Ciara McAnespie, who was posing plenty of problems for Róisín Phelan, and the corner forward raised a white flag.

But Cork, without playing well, kept plugging away and were on terms at the break, as Áine O’Sullivan pointed from play before Finn, who had three of her side’s five first-half wides, popped over her second free.

Having been level twice in the first half, the sides were deadlocked on six occasions in a tense second period, as Ellen McCarron popped over a couple of fine scores for Monaghan with that trusty left boot.

Goal chances came and went at both ends but when McAnespie scored that Monaghan goal, Paula Cunningham’s outfit had real hope of an upset.

But Cork, drawing on their vast reserves of experience, got the job done late on to keep alive their seven-in-a-row hopes, with Fitzgerald’s use of the bench a key factor.