Liam Sheedy couldn’t have done it without his back-room, and had the grace to know it 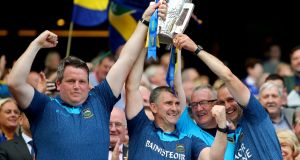 At the end, Liam Sheedy couldn’t have been more pointed in where he took himself or the company he sought out. In the moments after an All-Ireland final long whistle, all judgments are suspended and all grievances withheld. There’s leeway and there’s All-Ireland-winning Bainisteoir leeway.

If Donald Trump reckons he could shoot someone in midtown Manhattan and not lose a single vote, he’d want to get a load of an intercounty manager in the 30 seconds after an All-Ireland win. All fights fought, all wars won, all debts public and private ready for collection. In that brief moment – and for that brief moment only – Sheedy could have streaked up to the Ard Chomhairle and given Michael D a wedgie and nobody would have taken him by the ear for it.

But you are what you repeatedly do, and all that. At his moment of greatest triumph, Sheedy turned and looked for his three closest confidantes: Tommy Dunne, Darragh Egan and Eamon O’Shea. Dunne and Egan were close enough at hand and they went to grab him in a bear hug. But even then, even as the roars rose up through the stands and the players on the pitch melted into each other, Sheedy still insisted on doing the right thing in the right way and not doing it until it was right.

O’Shea was about 20 yards away down the sideline, standing on his own. This would not be unusual for Eamon O’Shea, still the only man to have been both a team manager in All-Ireland final and an op-ed writer in The Irish Times. He is, and always has been, a man apart, whether in life or in hurling. And here he was, sloshing quietly about in his own little private puddle of celebration for just a few seconds. Oblivious.

Sheedy, Dunne and Egan all started shouting at him. Eamon! Eamon! In the frenzy, they somehow managed to find the right radio frequency for O’Shea to catch, and as soon as he saw them, he high-tailed it up in their direction. Then, and only then, did Sheedy close the circle with the four of them in it. Sheedy, Dunne, Egan and O’Shea. The brains of the operation.

In his speech from the steps of the Hogan Stand soon after, Seamus Callanan listed out the support staff who make up the Tipperary back-room and thanked them all by name. He started with 40 hurlers and kept going until every last hurley carrier, groundsman and sponsor got a tip of the hat.

By the by, anyone who grouses about the size of the Dublin footballers’ back-room set-up needs to sit down with the video of Callanan’s thank-you list and maybe start pondering their life choices. If the Artane Band had still been on the pitch, they might have had to start playing him off had he found many more to namecheck. He was right to, of course. But it just goes to show what a travelling army an intercounty set-up has to be to succeed.

Point is, when Sheedy was being drawn back into the Tipperary gig last winter, it wasn’t just a team of hurlers he was taking over. It was a logistics operation, one that had mushroomed even in the eight years he had spent away from the scene. In a group that big, Sheedy has to give everyone their time of day and make them feel like they have their say.

But you only needed to go to a Tipperary game this year to see how much he leaned on Dunne, O’Shea and Egan for the nitty-gritty hurling stuff. Every time Tipp go out, it’s striking to see just how involved Sheedy makes the other three throughout a game. Egan is still only 33 and just a couple of years retired from life as the perennial Tipp sub goalie. This is his first year coaching, yet Sheedy has him running the warm-up and he’s the conduit from the stats people to the line during games.

Dunne would have been plenty of Tipp people’s value bet for the manager’s job when Mick Ryan walked last year. He’d managed the Tipp minors to a Munster title and seen them pipped by a single point in a harum-scarum All-Ireland semi-final last summer. On top of which, he’d been the hurling coach in the Dublin set-up. Sheedy didn’t worry about any of that – he made him the Maor Foirne and gave him as much running to do as any of his players.

O’Shea only joined up again after the league was over. Life as an economics professor doesn’t really make a lot of room for spring hurling, but when Sheedy asked him in February would he be interested in getting the band back together – or getting back together with the band, more accurately – he said yeah, he’d be available in the summer.

O’Shea stood down along this self-same sideline as Brian Cody in the phantasmagorical epic drawn All-Ireland of 2014, and saw his players squeezed till their pips squeaked in the replay a few weeks later. In the meantime, he has watched those players go on to win an All-Ireland without him involved at all.

Nobody would have blamed him had he thanked Sheedy for the nice thought but given it a pass. But he didn’t. He came in and coached and teased things out. In matches, you can see him go on to the pitch dispensing advice and water in equal amounts. Between himself and Dunne, indeed, Tipp sometimes looked micromanaged during games earlier the summer.

In a full-house Croke Park, however, nobody can hear your back-room scream. From Lee Chin’s goal in the semi-final onwards, the Tipp players took hold of their destinies and fought their own way out. The beauty of what Sheedy, Egan, Dunne and O’Shea were able to do was that they rendered themselves useless in the times of greatest peril. Their players did it themselves when nothing else would do.

In that four-man bear hug, Sheedy and his compadres could only have delighted in their obsolescence.