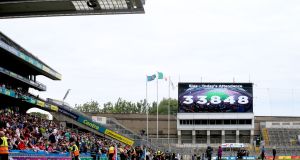 Croke Park, Sunday: as Kerry and Tyrone warmed up to an atmosphere more fitting for a league semi-final, the general pall around the place felt like a pretty straightforward reaction to Dublin’s awesome second half the previous night. Photograph: Tommy Dickson: ©INPHO

Mad the things you find in an idle hour. Hopping over a few lily pads online during the week, this column came across a news story in The Irish Times from August 1981, carrying above it the bracing headline, “Businessmen want O’Dwyer to train Mayo”.

“A group of Mayo businessmen,” wrote Seán Kilfeather, “want Mick O’Dwyer to take over the training of the Mayo county team and are prepared to back the venture with £10,000.”

Now, boy. That’s a newsman’s intro. Who isn’t reading on after that?

“The businessmen, apparently disappointed and disillusioned by Mayo’s poor performance against Kerry in the All-Ireland semi-final, seem to think the players need the experience and football craft of O’Dwyer in order to mould them into a good side. The spokesman for the group, Gay Nevin, who is the owner of a restaurant, said the players are good enough but they need somebody with experience of football at the top to help them to success.

"We are not complaining about the selectors or the people who are training the team at the moment," said Nevin. "We are merely saying that we need the best trainer in the country and that we are prepared to sponsor the costs of such a move."

To remind you, reader – this is August 1981 we’re talking about here. Kerry, with Micko at the helm, have just beaten Mayo by 2-19 to 1-6 in the All-Ireland semi-final and are a couple of weeks away from completing the four-in-a-row against Offaly. And whether serious in their intent or not, the bould lads from Mayo are talking about putting up 10 large to entice O’Dwyer up the country.

Could you imagine it this week? Some moneybags hotelier in Castlebar deciding he’s had enough of this carry-on and making a Godfather offer to Jim Gavin? Name your price, Jimbo. Go on away there and finish out your five-in-a-row and we’ll see you in Bekan sometime after Halloween.

With glorious understatement, Kilfeather did point out a couple of flaws in the grand plan. For one, Micko was already training Kerry. For another, Waterville was a long way from Killarney, never mind Mayo. For another, the Mayo county board were against the idea straight off the bat and had already responded by suggesting the businessmen put themselves forward as selectors, if they were so concerned. Yes, there were nits to be picked wherever you looked.

It was Kilfeather’s payoff line that echoed down through the decades, though. “The idea itself,” he wrote, “shows how seriously some people are taking the present situation in Gaelic football where very few teams are capable of putting up realistic opposition to Kerry.”

Well quite. Sitting in Croke Park on Sunday as Kerry and Tyrone warmed up to an atmosphere more fitting for a league semi-final, the general pall around the place felt like a pretty straightforward reaction to Dublin’s awesome second half the previous night.

On the streets outside the ground, you couldn’t walk 10 yards without being offered spare tickets. All the talk during the week had been of an attendance between 50,000 and 60,000. In the end, it was 33,848. It’s obvious that somewhere along the way, a chunk of people who had intended going to the game thought better of it.

Clearly, the vast majority of football followers have made up their minds about the final. Dublin’s rampant excellence has never looked more fearsome than in those 12 minutes after half-time on Saturday night where they finally subjected Mayo to the full Ride of the Valkyries treatment. It was as though Mayo opened their door to check if it was raining only to see a tsunami coming through the front gate.

Not that they’d say it in public, obviously, but it would have been a generally-held view in the Dublin dressing room that Mayo had that coming to them. It took nearly the whole decade for them to get there with Mayo but they did it. And if they can do it to Mayo, to the one team that have dogged them through their glory years, they can, obviously – and will, obviously – do it to anyone.

Mayo aren’t gone, of course. For one thing, there’s no such thing as gone. What are they going to do, not play football? Some of them will presumably hang it up in the coming months but most of them won’t and presuming the Super 8s survive the winter, Mayo are – by several dozen degrees – more likely to be in them next year than out of them.

This was never an All-Ireland-or-bust year for them. Nobody even began to seriously imagine they had an All-Ireland challenge in them this season until they beat Donegal nine days ago. It was only the beguiling nature of their story, the general yearning for a twist in what looks like a pre-ordained outcome, that got people jiggy last week. Reality came like an uppercut to the jaw. So be it.

Here’s a thing, though. A small straw in a big wind. The Mayo team that started on Saturday night was younger than the Dublin team. Only very marginally – an average age of 27.2 as opposed to 27.3 – but nonetheless, a younger team. And despite bringing on Keith Higgins, Andy Moran and Kevin McLoughlin over the course of the game, they were younger than Dublin at the end too – an average age of 27.9 as against 28.3.

These numbers mean nothing, obviously, in the here and now. But when it comes to the future, it does at least show that James Horan has made a start on Mayo’s most pressing concern. Matthew Ruane, James Carr and Fionn McDonagh were all on the pitch during that 12-minute onslaught at the start of the second half. Mayo need them to absorb it and carry it with them in years to come the way Jack McCaffrey, Paul Mannion and Ciarán Kilkenny absorbed being on the pitch as Donegal ripped them to shreds in 2014.

And yeah, it’s a fair bet the young bucks in the Kerry side will get the same treatment in the final. Dublin have come too far and achieved too much to let a crowd of college kids derail them at this stage. They have been the best team in the sport for most of the decade and would be worthy holders of the GAA’s first ever five-in-a-row.

It’s no libel on Jim Gavin’s side to find it all a bit depressing, though. It’s just simple human nature. As the flash-the-cash Mayo story from 1981 shows, it was depressing for people back then too.

There’s very little fun to be had with a one-team sport.

1 Gerry Thornley: Munster will make for interesting case study when rugby resumes
2 Game Changers: Gary O’Toole took a stand when others turned their heads
3 Georgia and Fiji in line to join Six Nations sides in eight-team tournament
4 Racing regulator happy with screening protocols despite high-profile breaches
5 James McClean says he gets no support for abuse he receives
Real news has value SUBSCRIBE

Laytown beach races cancel September meeting due to coronavirus 16:24
Racing regulator happy with screening protocols despite high-profile breaches 15:50
McNamara hopeful that Ireland under-20s will get to compete for Grand Slam 15:32
GAA dressing rooms to remain closed until further notice 12:10
Aidan and Donnacha O’Brien banned from racecourses for Covid-19 breach 09:49
Crossword Get access to over 6,000 interactive crosswords