Mayo meet in camera amid questions over New York fundraiser

Supporters’ foundation spells out stance on €250,000 it is withholding from board 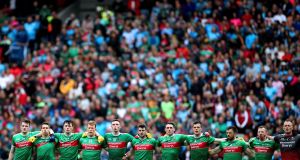 Financier Tim O’Leary says the Mayo senior football team did not benefit from the full value of his €150,000 donation last year, which was its intended purpose. File photograph: James Crombie/Inpho

The Mayo county board met in camera on Monday night as a dispute with an international supporters’ foundation over €250,000 raised at a gala in New York escalated.

The Mayo GAA International Supporters Foundation sent an email to clubs in the county on Monday, urging questions be posed to the executive.

The foundation through its founder, financier Tim O’Leary, had raised questions in a letter in September. Last week, Mayo GAA replied, calling on the foundation to hand over €250,000 which had been raised in a gala fundraiser in New York, organised by the foundation in May.

The money is being withheld because of concerns about the county’s governance as expressed by O’Leary, who in his latest communication with the clubs in Mayo, has set out his position in respect of a donation of €150,000 given to the county last year.

“1. Mr O’Leary approached the county board in 2017 with an offer of financial help.

The money was to go towards the preparation of the senior team based on an agreement entered into between Mr O’Leary, an officer of the board and the then Mayo senior team manager.

“3. It subsequently transpired that all the money was not used for its intended purpose and the team did not benefit from the full value of Mr O’Leary’s €150,000 donation.

“Mr O’Leary sought receipts to back up how the €150,000 was spent and the receipts only arrived in late August 2019, some 12 months later following repeated requests.”

He then takes issue with the back-up provided.

The letter from the board last week insisted that the money raised in May should be passed on: “It is worth repeating, however that any monies raised in the name of Mayo GAA must remain under the control of Mayo GAA county board.”

However, the foundation is unequivocal that this was never agreed with Mayo GAA, who stated last week that this had been “made abundantly clear”.

Central protocols provide that any association fundraising for a GAA unit must be subject to controls but according to Monday’s communique, this was not agreed with the foundation at any stage, which Monday’s email states was made clear in an email last April before the fundraiser.

“We can confirm that the county board chairman or the executive have never disputed the terms of the April 9th email or raised any questions as to who ultimately controls the money. Mr O’Leary also confirms that at no time in advance of the Gala Ball did anyone from the county board make it ‘abundantly’ clear to him that money raised in the name of Mayo GAA shall remain in the control of Mayo GAA. If they had then the Gala Dinner would not have taken place.”

Monday night’s county board meeting was also expected to deal with other issues such as why Mayo did not send any delegates to October’s special congress in Cork.