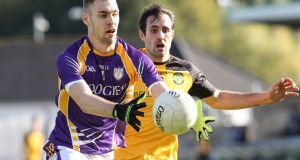 Conall Jones was the hero for Derrygonnelly Harps in the Ulster quarter-final win. Photograph: Andrew Paton/Inpho

Conall Jones was the Derrygonnelly Harps hero as he cooly slotted the winning penalty to put his team into an Ulster semi-final via a penalty shootout in Brewster Park.

Lee Brennan of Trillick had hit the post with the Tryone champions’ final kick, and the team who had looked like winners for so long were suddenly out of the Ulster championship.

The sides were level at the end of normal time on a score of Derrygonnelly 1-13 Trillick 2-10 after a pulsating encounter.

The Fermanagh club had made a dream start to the match when a free from Conall Jones dropped short and corner back Eamon McHugh flicked it past a stunned Trillick defence to raise the first of 15 green flags during the encounter in just the second minute.

That cancelled out an early point from Trillick’s two- time All Star Mattie Donnelly and signalled an early piece of Harps dominance. The Harps were on top at midfield and they led by 1-3 to 0-3 by the end of the first quarter but were caught by a well worked Trillick breakaway goal when Richard and Mattie Donnelly combined cleverly to set up Ryan who goaled with a rocket of a shot.

The sides were tied at 1-6 apiece at the break which was a fair reflection of a evenly contested and entertaining opening half. But Trillick were struck a big blow at half-time when Mattie Donnelly was not able to take his place for the remainder after getting injured on the stroke of half-time.

Nevertheless it looked like Trillick had found the crucial score of the second half in the 35th minute when Richard Donnelly and Liam Gray combined to send corner forward James Garrity through and he rifled the ball to the net through a forest of players.

And Trillick seemed set for victory when they led by 2-10 to 1-10 with five minutes to go. But the Harps rallied and three fine points, two from Garvan Jones and one from Shane McGullion, sent this thriller to extra time.

It again looked like Trillick had snatched victory in extra-time when wing forward Ryan Gray scrambled a dropping ball in the Harps square to the net to put them into a 3-10 to 1-13 lead, before Lee Brennan gave his team a five point lead at the end of the first period of extra time.

But the Harps rallied again through three points from Garvan Jones and a late equaliser from the ice cool Conall Jones to bring the game to the dreaded penalty shootout. Where the latter would be the hero again.